The Scavenger Hunt of Santa 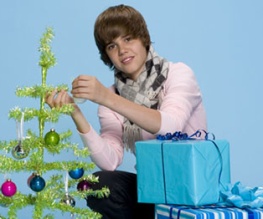 The film opens up with an elf named Bedhead (Bieber) who is being questioned by the F.B.I. (High School Musical Cast) because he allegedly is working with the number one most wanted criminal: Santa Claus (Allen). Santa Claus has been charged with thousands of crimes, including breaking and entering; stalking children to know when they are sleeping and when they are awake; and stealing cookies from a countless amount of households.

Little does the F.B.I. know that Santa’s workshop is not in the North Pole, as previously thought; it is inside a tree located in the middle of Cuba, where Santa is eating cookies with Elvis Presley and Michael Jackson.
While Bedhead was taking a trip to New York to visit his family for the holiday, he was snatched up and is now forced to decide to either give up Santa’s whereabouts or refusing to cooperate, which could mean going to jail. He solves this dilemma by giving the F.B.I. a single piece of paper. This paper starts a world-wide scavenger hunt for the government, with the elves trying to make them experience the joy of Christmas and its impact on others.

This heart-warming story is sure to make even the meanest Grinch’s heart triple in size. With amazing sound and picture quality, Burton makes it feel like you are a part of the movie and makes the audience hang on the edge of their seats the entire time. Featuring the talents of an all-star cast, this movie is a must see!

Previous: NO:EL
Next: Alien ‘news’ is web of lies