The Zombies Who Stole Christmas (And Ate Its Brains) 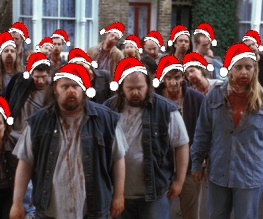 Shortly after midnight, the sheer gastrointestinal horror of Project Fruitcake rears its ugly, candied-fruit head when the infected Squadron start to exhibit symptoms of PTFS (Post-Traumatic Fruitcake Syndrome). In short order, the infected soldiers become Zombies, intent on devouring the brains of any they come across (if only to cleanse their palate of the fruitcake).

Sgt. Peaches McMullet (Petty), has no choice but to call in a favor from a long-time Black Ops Agent and former lover, Santa Claus (Rickman). With only hours to spare before he has to finish his nightly rounds, Santa comes in, guns blazing, to fight the evil Zombie menace before it can spread its Fruitcake-induced terror to the outside world.

“I’ve made my list, and checked it twice, and all I have to say now is…suck coal, you evil, Zombie bitches!”

With well-executed stunts scenes featuring Santa’s robotically-enhanced Reindeer and two of his jolly Elves (Jared Padalecki and Paris Hilton), this movie is a must see for this holiday season! I give it two enthusiastic thumbs-up for a fun, family-friendly Holiday movie.

To vote for The Zombies Who Stole Christmas (And Ate Its Brains) click the “facebook like” button at the top of this page.
Back to Write Christmas

Previous: Santassassin
Next: The Thorn In The Heart