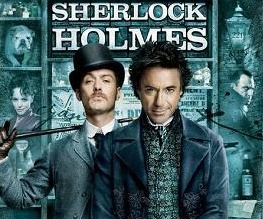 Sherlock Holmes had so much potential. The Great Detective is deathless and compelling, and as sublimely paired with Doctor Watson as whiskey and getting dumped by text. Therefore, the obvious thing to do with this archetypal Englishman – reserved, clinical, supremely intelligent – is to hand his canon to a laddish director best known for marrying Madonna. Isn’t it?

Conan Doyle’s legacy is so rich that Ritchie’s revamp of the Holmes saga didn’t even need a new plot – there are still dozens of short stories yet to be committed to film. However, Sherlock Holmes breaks new narrative ground – a brave and laudable decision, but more in the Light Brigade sense than one with which you’d want to be associated. Essentially, the scene is set thus: Holmes (pretentious, reckless, handsome) and Watson (staid, cautious, handsome) are forced from their customary torpor thanks to the mischievous antics of one Lord Blackwood (darstardly, gothic, handsome – Ritchie gets confused if his characters have more than three attributes). Blackwood, just so you know, is a distinctly Aleister Crowley-esque aristocrat who has apparently risen from the grave and set in motion a quasi-Satanic chain of events calculated to bring down the Government by exterminating the House of Lords. So far, so good. Blackwood’s intangibility for most of the film gives Holmes plenty of chances to get his detect on, mostly via rather odd voice-overs, and the breakneck action does at least mean we don’t have time to get bored. You may, however, feel that the homo-erotic twosome’s ceaseless gallivanting around London in pursuit of Lord Blackwood is a teensy bit contrived, as is the inexplicable presence of a massive Frenchman for Holmes to fight every 12 minutes (approx). It starts off funny, but becomes laboured and sad with undignified haste.

Implausible though the plot is, I have nothing but praise for the lead cast of Sherlock Holmes (apart from Jude Law, who is an insufferable flouncing git with more illegitimate children than any two actors need). Robert Downey Jr. absolutely nails his accent and does his best with what is essentially a two dimensional character (the dimensions being eccentricity multiplied by booze). Mark Strong’s demonic villain is an equally good stab at making the best of a poorly written role, and Rachel McAdams is reliable as Holmes’ intellectual foil Irene Adler. The trouble is that this world and the characters which inhabit it deserved so much better than Guy Ritchie. A man who’s been making simulacra of his blokey, nonsensical first film since 1998 should really not have been allowed to run riot with one of the most appealing literary creations in the English language unless his contract explicitly banned a) explosions, b) gratuitous bare-chestedness and c) people being punched in slow motion. Ever.