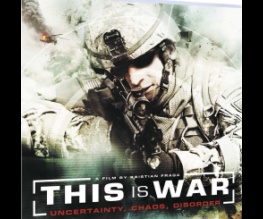 As simplistic and complex as Full Metal Jacket, This is War is a look at the fierce bond between marines as they endure battle, stress, monotony and anticipation in their life on the frontline. It’s like Jarhead… except it’s totally real.

In July 2002, First Lieutenant Mike Scotti was propelled to the frontline of one of the most notorious military campaigns in recent years; Operation Iraqi Freedom. Scotti used his personal mini DV-camera to record his fellow marines playing in the sand, enduring unearthly conditions and enduring battle with SCUD missiles flying over their heads. On his return from Iraq, Scotti entrusted documentary filmmaker Kristian Fraga (Anytown, USA) with the footage. The end result is a video diary that feels like a movie.

While This Is War is blissfully lacking in right wing propaganda, moments of political or soul-searching depth are underplayed; juxtaposed with their opposites to diffuse rather than provide ballast to the commentary. Examples? Powell is filmed saying the Iraqis are constantly moving around their WMDs to hide them from the weapons inspectors. Scotti swerves the camera away from the politics to reveal the the things he is taking into the combat zone to remind him of home and his personal reasons for doing this mission. These include a pic of his brother dressed as Bin Laden, a scrapbook photo of New England and a picture of Beth A. Quigley, who was one of the victims of 9/11 and went to Scotti’s school. We learn a lot about Scotti from his keepsakes – we learn nothing of what he thinks of the big picture. Except that he feels strongly motivated by the Twin Towers, of course – but they seem to be an answer for everything.

There are other moments lacking in political clarity. As the marines head north in an incessant trundling of dusty trucks, Rumsfeld asserts in a voiceover that the Iraqi regime won’t last much longer – and asks for the soldiers to put down their weapons. As they ride the trucks, Scotti’s adrenaline-fuelled marines are in a state of pre-battle bloodlust and couldn’t be further removed from Rumsfeld’s sentiments. “We’re, uh, heading North. When we get there we’ll, uh, kill everybody. When we’ve killed everybody…? We’ll continue North.”

From the documentary it is pretty clear what Scotti is aiming to do. He’s taking war away from the big questions and down to the human level. A marine knows how to deal with confusion – he keeps life very, very simple, and saves the big questions for when no-one’s looking – including the camera, which means we’ll see no soul-searching here.

And yes, all the cliches are true. Marines bring their own personal perspectives to the mission. They don’t get along. They smoke cigars and shrug away big thoughts with horseplay. At the end of the day, the only people they trust are other members of their battalion. Knowing that a guy who hates your guts will die for you to make it out alive is worth more to a soldier than any general’s declarations.

This is War quotes

“Who says we’re here for the oil?” [ camera cuts to a Kuwaiti oil tanker rolling past ]

“All the cliches are true”. This Is War review

Previous: Meryl Streep and Julia Roberts to play Mother and Daughter
Next: Is Leonardo DiCaprio The Great Gatsby?