The Princess And The Frog: DVD Review 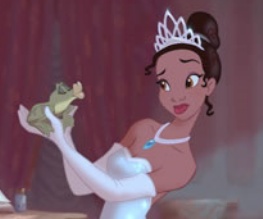 It may be strange to think it, but in an age where we’re so used to 3D creatures, pixilated flying houses and talking toys, a 2D film can be considered pushing the boundaries of today’s kids entertainment. Gone is the golden age of Disney classics- The Lion King, The Little Mermaid, Aladdin – all-singing, all dancing, all bloomin’ marvelous. Today what kids want is action explosions, nifty special effects and some smooth-talking robots, right?

Put Down The Mouse, Pick Up The Pencil…

The Princess And The Frog is Disney’s first ‘hand-drawn’ endeavour since the unmitigated disasters that were Brother Bear (2003) and Home On The Range (2004). After the blistering success of Toy Story, Disney decided that the future of kids films was in CGI, cunningly ignoring the fact that Toy Story simply had a freakin’ awesome story, whereas Home On The Range had a semi-comical cow and that was about it. No one we know ever bothered to see Brother Bear as it looked so awful, so we can’t really comment on that one. Either way, since then it’s been CGI hits that have reigned supreme; Monsters Inc, A Bug’s Life, Bolt and Up all scored massively at the box office. The big draw of The Princess And The Frog, in lieu of fancy effects, is the fact that the heroine is African-American, and rather than being a princess is a hard working New Orleans girl with dreams of running her own restaurant. Are we ushering in a new age of Disney?

Tale As Old As Time

In a word, no. But that’s not necessarily a bad thing. The Princess And The Frog is a simple story beautifully told, taking you back in time to the golden age of kids films, rather than forward. It tells the story of Tiana, a daughter of a chef who is determined to follow her father’s dream and open her own restaurant. She works all day trying to afford the down-payments, and never has time to dream of the life of a princess. Meanwhile, a young Prince by the name of Naveen has been turned into a frog by the terrifying ‘Shadowman’ and must find a princess to kiss in order to turn back. Mistaking Tiana for such a maiden, he kisses her and – oops! – she turns into a frog too. It’s up to the two of them, along with a jazz playing alligator and a voodoo lady, to stop the shadowman and reverse the magic. Can they do it? I think we all know the answer to that.

That’s Some Fancy Colouring In…

In style, it has echoes of Disney classics like Beauty and the Beast with its great musical score and well observed yet loveable characters, but also seems very self-aware, with its PC squeaky clean messages and well-rounded ethnicity. The animation, it has to be said, is gorgeous. Team Disney have really pushed the boundaries of what 2D animation can capture, and within about five minutes of sitting down to watch you are completely lost in a beautifully drawn world. In an Avatar-crazy world, it is actually rather refreshing to know that you don’t need 3D immersion to feel completely absorbed in a story. The only problem we could see with The Princess And The Frog was that though the story was loveable, funny, well paced and engaging, its characters sometimes lacked the complexity we’ve come to expect from recent Disney. The animation doesn’t look old fashioned, but occasionally the characters kind of do.

All the same though, this is a delightful, colourful romp, especially for kids who maybe haven’t been introduced to much 2D Disney before now. We hope to see more of this ilk from Disney in the future, if only to prove that James Cameron can’t completely tell us what to do.

* Bonus DVD and Digital Copy of the Film
* Play the Movie with Work In Progress
* Deleted Scenes
* Music & More
* Bringing Life to Animation
* Audio Commentary
* Magic in the Bayou: The Making of a Princess
* The Return to Hand Drawn Animation
* The Disney Legacy
* Disney’s Newest Princess
* The Princess and the Animator
* Conjuring the Villain
* A Return to the Animated Musical
* Art Galleries
* What Do You See: Princess Portraits
* Disney Digital Copy Walkthrough
* Sneak Peeks
* BD Live Connectivity

What did you make of Disney’s new offering? Kissable, or avoidable? Tell us below!