On the first day of Christmas, Best For Film gave to me…

You thought we were going to do Alan Partridge, didn’t you? You have absolutely no faith in our ability to do advanced searches on IMDb. Nope, our pick for the feathery fellow in the pear tree is the relatively obscure Ross Partridge, an actor, writer, producer, director and partridge (we’re not sure about that last bit) whose finest hour was arguably a thirty-second bit part in Jurassic Park: The Lost World. His character has perhaps the second best minor character name in all of cinema, beaten only by Anne Sellors. In case you don’t know Anne, this is her ENTIRE filmography:

Pretty nifty, we think you’ll agree. Anyway, Ross Partridge is almost as good as her, because his role in the most significant film of his entire career, Jurassic Park: The Lost World (it’s not that significant, but neither is Ross Partridge) is this; he plays Curious Man.

That’s Curious Man, people. What more do you need from a name? So simple, so elegant – a noun and an adjective, surely an ample sufficiency for any mere human (unless your noun and adjective are ‘human’ and ‘mere’, in which case there’s obviously quite a lot of room for narrowing down). And the best thing is, Ross Partridge’s Curious Man is manifestly not at all curious, he’s just a fucking idiot. With sixteen words to say (seventeen if you count a sort of strangled yelp thing). Would you like to see his role? Obviously you’d like to see his role – here it is in a YouTube video which has been created exclusively to showcase just how bad Ross Partridge is:

In case you hadn’t worked it out, Ross Partridge (has anyone ever typed Ross Partridge this many times before?) is the one who isn’t Jeff Goldblum. In case you really, really haven’t worked it out, here’s Scene 7 of the original script by David Koepp, the fifth most successful screenwriter of all time. The place is INT SUBWAY CAR, the time is NIGHT.

MALCOLM finds a seat on the crowded subway car and sits down. He looks awful. Tired. Weathered. He notices a CURIOUS MAN across from him staring at him. Nervy, the Curious Man gets up and approaches.
MALCOLM (under his breath) Shit.
The Curious Man sits down next to Malcolm, grinning.
MAN You’re him, aren’t you?
MALCOLM Excuse me?
MAN The guy. The scientist. I saw you on TV. (conspiratorially) I believed you.
No response from Malcolm. The guy leans in even closer.
MAN Roooooarrr.
Malcolm gets up and moves to another seat on the car, away from the Curious Man. As he sits down, he notices two other COMMUTERS across from him are staring at him, that special look reserved for those involved in some kind of scandal.
Malcolm looks at them. They look away. He pulls the collar of his coat up tight around him. 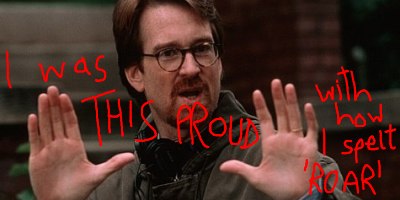 Props to you, David Koepp – that’s some pretty gnarly writing. “The guy. The scientist.” Fuck adjectives (see above), all David Koepp needs is a definite article and his Big Book of Nouns! We don’t even know why he bothered with ‘Curious’ – just call Ross Partridge ‘The Guy’ or ‘Some Dude’ and have done with it. After all, who wants exposition or characterisation or dinosaurs when you can just watch this on repeat forever?

Gets us every time. But hang on, no need to make an I Love Ross Partridge t-shirt and then cancel the rest of your life – surely you know that Ross Partridge has done OTHER FILMS? Loads of them! He made five films between 1992 and 2007, which is probably more than you, and since then he’s made another fourteen – guess the Jurassic Park money finally ran out. But we’d like to concentrate on one particular gem, noteworthy largely because it contained Ross’s first ever starring role. We expect you know what’s coming – if anything, you may be a little underwhelmed after so many decades of seeing it on Sight & Sound’s Best Films Ever No We’re Serious This Time list. Forget that dinosaur shit, we’re talking haunted mirrors that make Ross Partridge kill people! Amityville: A New Generation, the direct-to-video SEVENTH instalment of the apparently endless Amityville series, is the prophecied superfilm of which we speak – and we’ve found you a trailer. Ignore the voiceover that says Terry O’Quinn and David Naughton star – this film is all about Ross Partridge…

Gosh, he gives us chills. However, much as we’d love to talk about his 90s acting career forever, there’s more to Ross Partridge! Of course there is. Not content with being the major unifying force of Western culture for the last twenty years, he’s also friends with Kevin Spacey (!!!!) and works extensively with his production company Trigger Street Productions. Obviously he wasn’t involved in The Social Network or Margin Call or anything really good, but this one time he directed a documentary about a motorway! And he had something to do with that 9/11 documentary Spacey narrated! He’s got fingers in so many pies he has had to be barred from the Hollywood Pie Shop, because a) everyone was jealous of his finger-pie collection and b) because that’s revolting, Ross, you haven’t even washed your hands.

Ross Partridge will turn forty-five next year (February 26th, since you’re asking), and we can’t think of a better early Christmas/even earlier birthday present for him than this, the most in-depth article ever written about America’s foremost actor and gamebird. We love you, Ross Partridge. Merry Christmas.

Look out for the rest of our 12 Days of Christmas, arriving every day from now to Christmas Eve!