On the twelfth day of Christmas, Best For Film gave to me…

It turns out that Googling ‘From Dusk Till Dawn band vampires drummer’ is a spectacularly ineffective way to find videos, so you’re going to have to be content with this: a short, German-dubbed clip in which the lead singer of Tito & Tarantula shouts something incomprehensible at Robert Rodriguez’ fearless vampire hunters before, apparently, blowing himself up. Standard.

“Have you read The Tin Drum, by Günter Grass?”
“Yes, it’s brilliant. Why?”
“Oh, there’s a film of it and Eli said it should be on the list. *wikipedia* Is it about… Nazis?”
“Sort of. There’s a midget in it, and in one scene he’s looking at his mum’s vagina or something.”
– a conversation just now, in my house. Make of it what you will.

I obligingly went to see Tenacious D in The Pick of Destiny because I was sixteen and the D had soundtracked quite a lot of my early adolescence. Needless to say, it was an error. But while Jack Black and Kyle Gass’ overblown rock musical had very few highlights, its cameos certainly rate – Meat Loaf, Ronnie James Dio (RIP) and Ben Stiller are all memorable, but nothing quite says ‘fuck you if you don’t like my music, I hang out with gods of rock’ like persuading Dave Grohl to dress up as Satan and play the drums at you in some sort of Stygian studio.

We can’t tell you a whole lot about Drum Garrett, because nobody knows very much about him – he’s the anti-Kevin Bacon, a Hollywood enigma who is mentioned only in the whispers of the very lowest, the most obscure and shunned of actors. “I actually saw him once.””I don’t believe you!” “Honest to God, I did. It was a while after he played #1 Bully in The NeverEnding Story, but just before he realised it would be the highlight of his seven-role career.” “”You lucky bitch; I wish I’d seen him. People say that if you rub his empty wallet it gives you luck.” Poor old Drum.

The spiritual sequel to Talladega Nights is exactly as good as you’d expect something considered “the spiritual sequel to Talladega Nights” to be, but the combination of Will Ferrell and John C Reilly produces a few beautiful moments – chief among them the scene in which Ferrell’s lazy middle-aged twat character Brennan has a go on Reilly’s ditto ditto ditto ditto Dale’s drum set. Have you ever threatened to put your scrotum on someone else’s musical instrument? If so, have a read of this.

Can you believe that Drumline is ten years old this month? The timeless story of a drummer who doesn’t get on with another drummer has certainly stood the test of ti- oh, turns out literally nobody except Florence cares about Drumline any more. Still, starring in it worked out well for Nick Cannon – he married Mariah Carey and had a row with Eminem, and did pretty much nothing else ever. Keep on drumming, Nicky boy!

“Hey,” we can virtually hear you mumbling at your screens through a mouthful of brandy butter and regret, “there’s no drumming in Hook, just superb performances and a compelling storyline!” Well, big shot, time to wise up – legendarily awful man (and drummer) Phil Collins pops up early on in the film as the police inspector who really doesn’t care about Robin Williams’ children being nicked. Oh, and while we’re on the subject of your mind being blown? That bearded pirate who ends up in the Boo Box is GLENN FUCKING CLOSE. Go watch it, and thank us later.

If you haven’t watched The Muppets Christmas Carol yet this month then you’re dead to us. Where would Mr Fozziwig’s Christmas party be without Animal on drums (and, indeed, shouting at people)?

“On drums, Spazzy McGee…” Outspoken drummer Freddie “Dude, you’ve got a disease” Jones was much more fun than the wimpy keyboard kid or that mad bitch who wanted to run the universe, although if we sit through School of Rock these days it’s largely for Sarah Silverman. Kevin Clark, who like the other young actors was principally chosen for his musical rather than thespian prowess, never made another film and (we assume) is now one gigantic meth scab.

We can’t remember the name of any of the drummers in Spinal Tap, and that’s as it should be – after all, when you’re in the most significant skiffle/folk/rock group of the last fifty years it’s only right that your drummers should periodically succumb to spontaneous human combustion, bizarre gardening accidents and suffocation on the vomit of person or persons unknown. Don’t forget, you can’t really dust for vomit (but you can dust for idiocy, person who uploaded this YouTube video, so watch how you spell ‘drummer’ next time).

Pretty much the definitive Christmas film of the last decade, Love Actually is practically overflowing with unexpected musical turns – Bill Nighy sings, Hugh Grant dances and Liam Neeson weeps prophetically at the death of his wife. But who could forget little Sam drumming his heart out to attract the attention of some American tart with terrible taste in hats? If that song had gone on another thirty seconds we reckon he’d have thrown one of his sticks straight through her eye, and a good thing too. 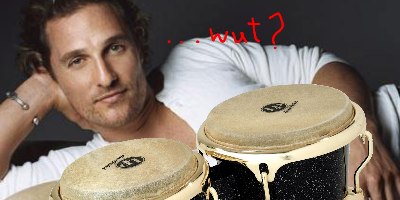 The gleaming and frequently shirtless star of Magic Mike is notorious for loving to play bongos in the nude, which seems like an extraordinarily high-risk occupation when one considers that Matthew McConaughey’s mighty testicles are probably a similar size and shape to bongos. Still, you don’t get to be Channing Tatum’s stripping boss without being willing to break a few eggs…