On the second day of Christmas, Best For Film gave to me…

No relationship on Earth is more beautiful, and more suspicious than John Woo’s love affair with doves. They litter his filmography like so much avian tippex on a BMW parked beneath a tree, and who can blame him? They stand for innocence, or something. They aren’t turtledoves, exactly, but it’s rather difficult to find examples of the European or Harry turtledove in cinema.

The most inexplicably legendary use of the John Woo Dove’splosion was in classic 1997 action/thriller/face/off Face/Off, possibly the more Woorgasmic film of all time. In what has become the greatest Mexican standoff in all of cinema, Nicolas Cage and John Travolta (who are secretly John Travolta and Nicolas Cage respectively) are pointing guns at each other, along with what seems like half of Los Angeles. When the shooting inevitably starts, doves happen. Lots of doves. Doves just fucking everywhere.

Why is this church filled with doves? What does it represent, John Woo? The death of innocence? The immortal souls of the departed being finally free? Avian flu? John Woo’s intentions are, obviously, obscured in mystery, but what we can tell you is that this scene is perfect. Every performance is nuanced and thoughtful, every bullet is a love letter from the mind of John Woo. There’s a church full of guns and the most deadly weapon is Joan Allen with a chair. Just brilliant! Although Face/Off doesn’t appear to have anything to do with Christmas, let us remind you that Jesus makes a cameo in this dovetastic shootout, sporting the traditional “wooden idol nailed to a 2X4” look that got him on the front cover of Pope Monthly.

Face/Off was originally intended for Arnold Schwarzenegger and Sylvester Stallone, but John Woo swept in like an angry and vengeful turtledove, demanding Cage and Travolta instead. As much adoration as we have for Face/Off, we can’t help but imagine what epic insanity would have occurred with the original casting. Schwarzenegger trying to act like Stallone. Stallone wearing Schwarzenegger’s face and doing his wife. Imagine them trying to impersonate each other at the same time. What a missed opportunity! It’s not too late, Hollywood – we demand a remake immediately! 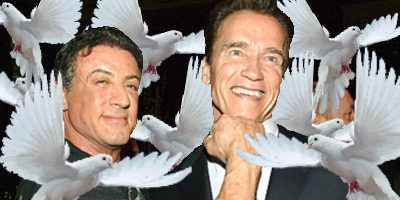 No Christmas is complete without a healthy serving of Macaulay Culkin. That’s nineties Macaulay, obviously – nobody wants to look at 2012 Macaulay Culkin, his years of increasingly kinky ‘call me Kevin’ sex with Mila Kunis and absolutely not Michael Jackson have left him a twisted, gurning and hideous (but still improbably blonde) shadow of his former self. But back in the 1990-1992 glory days, he was a golden Christmas god with a Polaroid camera and overactive eyebrows. The apotheosis of modern slapstick, the Home Alone duology (Best For Film refuses to recognise the legitimacy of the post-Culkin years) represent a peak which visual comedy may never again attain. Joe Pesci gets hit by a flying tin of paint, people!

But if there’s one thing about Home Alone 2 more important than pelting members of the Goodfellas cast with DIY essentials, it’s birds. We hadn’t really realised until the time came to construct this list, but birds are fucking everywhere in Home Alone 2. They are, admittedly, largely pigeons, but Vincent wrote the entire Face/Off bit about the wrong sort of dove so sod it – from the moment Kevin spots the Bird Lady hanging out with horrible deformed flappy things all over her, every significant bit of plot is signposted by avian intruders. Has anyone ever seen John Woo and John Hughes in the same room? 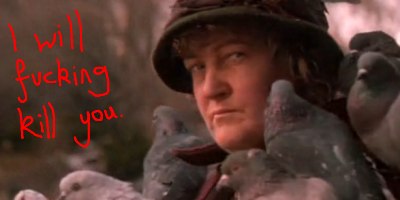 When Kevin gets over his aversion to homeless people (or, rather, balances it with his yen for birds), Bird Lady takes him to the roof of the Carnegie Hall to hang out with some more pigeons and hear about her life went to shit; then, when Wet/Sticky Bandits Pesci and Daniel Stern catch him up, she’s instrumental in their capture by… well, by throwing birdseed at them so they get pecked half to death. Standard. Is this the finest example currently on film of birds being used as a weapon of war? (Spoiler: no it isn’t, that’s Birdemic).

How much would you have to be paid to film that scene? Anyway, the point is that the inexplicable tide of pigeons invading Home Alone 2 merely serve as a distraction from the real heroes of the film – the weird little ceramic TURTLE DOVES that creepy old toymaster Mr Duncan gives Kevin. Refresh your memory with this clip, and try not to stare too hard at their hands to see if Mr Duncan strokes the back of Kevin’s fingers:

He’s just desperate for Kevin to come back and give him a dove, isn’t he? It’s a real shame that so few obscure and illegal sexual practices are named after birds, because we would be having a FIELD DAY if they were. Mr Duncan… wants a dove job? Doesn’t even make sense. If pigeons symbolise aggression and action in Home Alone 2, turtle doves are the symbol of love – not platonic, friendly love like the love between Harry and Marv, but the roiling, greasy lust which pervades Mr Duncan’s soul and stains every inch of his Fifth Avenue child-trap. Our number one turtle dove is the acceptable face of the love that dares not speak its name.

…and a partridge in a pear tree!