French Hens that we have chosen are, most definitely, something to crow about. " />

On the third day of Christmas, Best For Film gave to me…

Has anyone ever in the history of the world made a better film about the antics of a raucous group of talking chickens? We think not. The distinctive plasticine gloss of Aardman Animations never fails to bring a stop-motion smile to our faces, and the best of the breast in Chicken Run is, without a doubt, Babs. Babs, the loveable, innocent, dim-witted fowl, has enough meat on her to feed the extended Cratchit family, and embodies everything we love about the classic ‘Hen’ stereotype. Whilst her portrayal has led to accusations of anti-hen tendencies (Nick Park has been egged on a number of occasions as a result), with her iconic Northern squawk and love of knitting, Babs is the true beating heart of this film.

Up there with “Go ahead, make my day” and the vastly inferior “Frankly, my dear, I don’t give a damn”, we find the noble strains of Babs: “I don’t want to be a pie! I don’t like gravy!”. Whilst Ginger gets on our last nerve with her self-righteous speeches and flirtatious simpering, Babs clucks what we’re all thinking. Hers is the true underdog story; she dreams, she works hard, and, in the end, she is proof of the great drive of hen-kind towards survival. Through all the hardship she suffers, her optimism and resilience inspires us all. Urban legend has it that Darwin was studying Babs’ heroic tale at the moment he recorded the iconic theory: “It is not the strongest or the most intelligent who will survive, but those who can best manage change”. With her exceptional ability to adapt her knitting to an ever-changing kaleidoscope world, we have no doubt that Babs will continue to thrive and inspire the next heneration.

For a hen’s-eye view of this film click HERE.

“To the husbands who’ve won you, the losers who’ve lost you, and the lucky bastards who’ve yet to meet you!” Oh Dermot Mulroney, you smooth-talking, sleek-haired charmer. Whilst we’d love to dedicate a portion of our lives to celebrating you, you wonderful man, I’m afraid this time you’ll have to take a backseat to our tasty hens decked out, as they are, in hideous neck-scarves and pastel sweaters. The Wedding Date is a classic feminist tale of lonely singleton hires male escort to make sleazy ex-boyfriend jealous. Until lonely singleton falls in love with male escort and sleazy ex-boyfriend escapes unscathed. Debra Messing doesn’t stray far from her gnarled Will and Grace roots, but it’s not her acting that we watch this glossy hen for, it’s her glorious flaming feathers! Her preppy golf-mum outfits, however, get a bit tiresome. 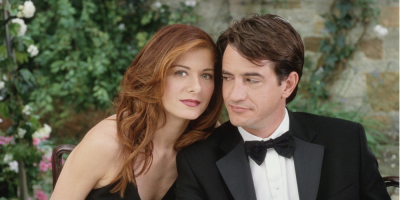 Amy Adams also pops up in this coop as the primped, blonde, doe-eyed sister who sits through her own hen party silently sipping at her straw and marries a man with as much personality as straw. Her lucky husband doesn’t even seem to mind the fact that she slept with his best friend (sleazy ex-boyfriend of before). However, ruling the roost in The Wedding Date is, without a doubt, Sarah Parish. Best known for TV roles in Cutting It and Mistresses, Parish’s biting wit and bone-dry delivery reminds us of Kristin Scott Thomas in Four Weddings and a Funeral – she’s the hen you want at every party. The rest of the giggling, sniffing gaggle comprise of Pretty Woman (credited as such), Danielle Lewis, and Flirty Girl (uncredited), Lisa-Marie Long. These game birds do a cracking job of swarming round Mulroney and crowing predatory lines such as “Come on”, “Stay”, “You know you want to”. Like Dermot Mulroney, we thank you, wonderful hens, for allowing us a glimpse into the most ancient and revered of female traditions, and what a fowl glimpse it is.

From the sublime to the clucking ridiculous; top of our pecking order on the third day of Christmas is this 1985 unofficial sequel to the 1939 The Wizard of Oz. Dorothy is now a melancholy insomniac, pining away for her friends in Oz, and in a brave attempt to cure this her Uncle and Aunt send her to a psychiatrist who specialises in electrical therapy. We’re definitely not in Kansas anymore! Dorothy is saved from this child-torturer by a mysterious blonde girl and finds herself back in Oz, no longer accompanied by a canine companion, but one considerable more feathered. The real star of the piece is Billina the chicken who gains the power of speech upon her relocation into Oz.

This garrolous galliforme (look it up) spends the film transcending gender and species boundaries. She is a hen hatched before her time. In a climactic confrontation with the Nome race, it is Billina that pulls through to save Dorothy with a timely egg-drop that poisons the Nome King, accompanied by a glorious crow of “I’ve finally laid an egg!”. Her wise insights, and bravery in the face of extreme peril, lead to her appointment as political adviser to Queen Ozma after Dorothy bids goodbye to the Yellow Brick Road. Billina is a stop-motion puppet of proof that some hens can have it all.

Unfortunately we had to leave out such pinnacles of achievement as the 2006 musical-comedy-chicken-horror Poultrygeist: Night of the Chicken Dead. And the groundbreaking 1984 television movie The Hoboken Chicken Emergency. AND the flagship US documentary The Natural History of the Chicken. We can only apologise for these crass overflights.

…two turtle doves,
and a partridge in a pear tree!

Previous: Golden Globes – nominations for 2013 are out!
Next: Love Crime