On the ninth day of Christmas, Best For Film gave to me… 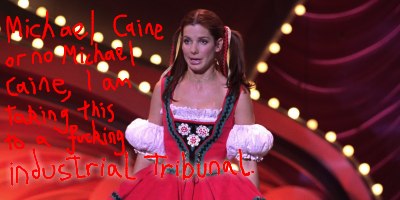 Bit of a wobbly start, we admit, but we’re obliged to include Sandra Bullock somewhere in every blog series we write (did you know she has her own bistro?) and we’re fairly sure She’s a Lady is in the soundtrack somewhere. Anyway, hard-bitten FBI agent Gracie Fields’ transformation into a Miss America contestant is deserving of a place on any list of cinematic ladies – at least she didn’t burn to death inside a giant swan! If you need any more reasons to quietly love Miss Congeniality, we have five: Michael Caine, Michael Caine, Michael Caine, this absolutely incredible video of German Sandra Bullock:


…and Michael Caine. “Glide – it’s all in the buttocks. Don’t I look pretty?” 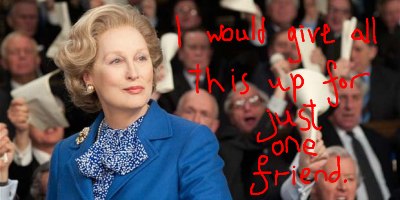 Meryl Streep’s Oscar-winning performance aside, The Iron Lady isn’t going any higher up the list because we won’t celebrate it until Maggie is deep in her grave – Christmas or no Christmas, BFF is with the miners and Argentina and whoever else the nasty old hag pissed off. But we can still find room to appreciate Meryl’s stunning portrayal of Britain’s most evil woman across four decades of her blighted life – in fact, couldn’t some sort of cautionary Christmas tale be made of her sad story? Be kind to the miners this Christmas, or your husband will die and you’ll be left mad, alone and universally reviled. Jingle bells! 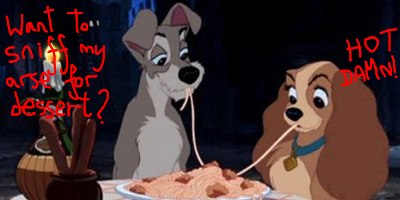 We’ve never actually seen Lady and the Tramp, but if we’ve understood it right it’s about a posh dog and a skanky dog meeting in some sort of outré bin-themed pop-up restaurant and then fucking all over the place and possibly killing a rat (?) and then they just both move back into the posh house and everything’s alright forever. Whatever, we had better things to do in 1955. Still, a character who’s actually called Lady is too good to pass up, even if she’s surrounded by other characters called things like ‘Darling’, ‘Policeman’ and, of course, ‘the Tramp’. That dog’s self-esteem must have been through the floor… 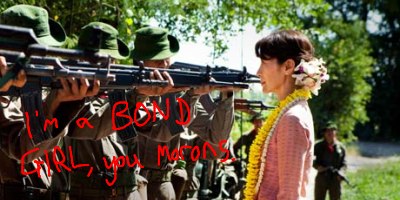 Did you know that Best For Film was the first news outlet in the world to announce Michelle Yeoh’s casting in The Lady? Just a Christmas boast for you there. The story of Burmese politician and activist Aung San Suu Kyi, The Lady is largely memorable for prompting more than eight hundred comments (since, alas, deleted) on this very site, mostly from Burmese people arguing about whether or not Yeoh should have been cast at all. Our favourite was the three paragraph rant about “interfering Malaysians” which was replaced the following day with an apologetic message from the (very hungover) commenter in question. 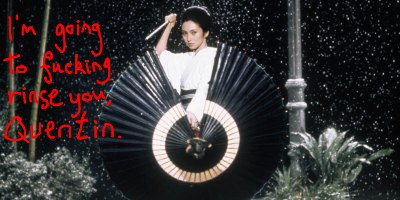 The inspiration for Quentin Tarantino’s hideously plagiarised Kill Bill films, Lady Snowblood is an iconic Japanese film heroine whose gore-drenched antics far outstrip the Bride’s most memorable fights. Shurayuki-hime (a pun on the Japanese name for Snow White, it refers to the warlike Buddhist deity Asura) is conceived in a prison after her mother is raped and witnesses her family’s murder. Rather than give up on herself and die, Lady Snowblood’s mother shags every guard she can get her hands on until she falls pregnant, gives birth and then dies. Her daughter grows up and kills everyone. Job done! 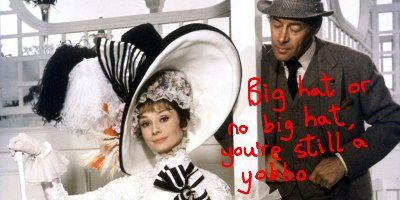 The most unashamedly snobbish musical of all time is coming in fourth, boasting as it does Audrey Hepburn’s celebrated transformation from strangled trans-Atlantic guttersnipe to strangled trans-Atlantic debutante. Fun fact: Rex Harrison’s refusal to dub his own songs in post-production (which is ridiculous, he didn’t really sing them anyway) resulted in the construction and use of the first ever radio microphone, hidden in his bow tie. Hurrah for Professor Higgins, advancing the cause of phonics even behind the scenes! What a shame that he’s an awful, awful sexist twat. “Ah, Eliza. Where the devil are my slippers?” Fuck off. 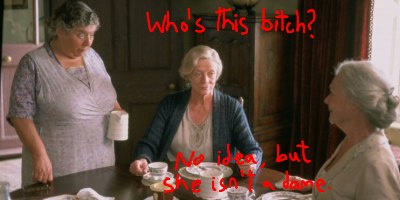 From an unpublished blog by Florence Vincent titled Top 10 Most Colourful Films:
Ha ha! Look at them there, in all that lavender. Typical Judi Dench and Maggie Smith. Always getting in the lavender and then coming home smelling of lavender and then you have to give them a bath. That is so them. This is a film about two old dames (also: Dames) who befriend a “mysterious stranger” who washes up on a beach near their house. It turns out he’s a Polish violinist and not a paedophile as the term “mysterious stranger” implies. 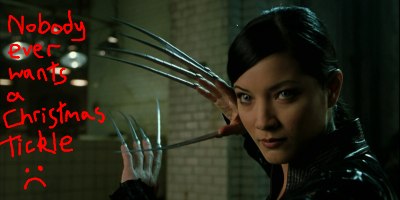 One of the most criminally underused characters in the X-Men series, (Lady) Deathstrike floated around in the background of X2 before being dispatched by Wolverine and a massive syringe of molten adamantium. Actress Kelly Hu reportedly wanted to revive the character for X-Men: The Last Stand, but when Bryan Singer exited the franchise her plans went up in smoke. Still, Bry’s back for time-travelling sequel X-Men: Days of Future Past – here’s hoping that his return heralds a second coming for the spikiest mutant villain this side of that porcupine guy! 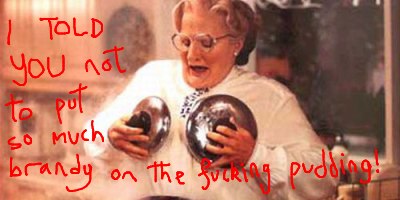 Who else? Dude looks like a lady, and lady looks like she’s bagged the number one spot on this list through a stunning combination of prosthetics, stalking and a really ropey Scottish accent. Everyone loves Mrs Doubtfire, despite the fact that we’ve now spent years explaining to various family members that “a stiff Chardonnay” isn’t actually a thing and nobody remotely decent drinks Chardonnay anyway, Emily, and you’re twelve years old so stop fucking trying to order it in pubs. Ahem. We’ll leave you with this (Italian) video, and remember – if the courts take your children away, just pretend you’re an old woman and infiltrate their lives! They’ll probably be fine.

Previous: Prometheus 2 not being written by Damon Lindelof
Next: Pop Up Screens – Christmas Edition