Back in Vue #1 – Little Shop of Horrors (Director’s Cut)

Let me tell you a tale. When I was a wee boy growing up in a small town with little in the way of entertainment facilities, save rivers in the summer and snowy hills in the winter, there was one shop that provided a saving grace for both myself and my parents on days when I almost certainly would not shut up. That shop? The video rental shop, of course.

Run by an elderly, lesbian woman called Toot (rhymes with Foot), the shop had a dank, musty smell, walls covered in fading VHS cases – the kind with the plastic dust jacket that made you want to break the spine of the case to see if it came off – and stacks of black cassettes behind the desk, where Toot, her partner Penny or sometimes a nice older boy called Sam Cooke (not that one) used to sit. 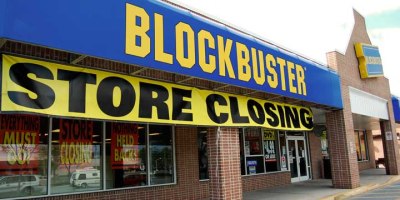 Now, there was one film that I had my eye on every time I went to that shop, and that film was Little Shop of Horrors, the 1986 musical version starring Rick Moranis. It was kind of a tradition, I’d rent that and my sister would rent Aristocats, we’d argue over which one to watch first, come to some arrangement and while away the evening / weekend / summer holiday. I saw Little Shop of Horrors countless times between the ages of 4-10; thinking about it, I still hold that film responsible for the love of vicious, man-eating, soul-singing plants that burns like a proud phoenix within me to this day.

Watching it last night as part of VUE’s ‘Back in Vue’ cult cinema season, I was struck by how much I remembered, particularly the songs. It is a musical, after all, and quite a heavy-handed one at that – the numbers come thick and fast, with three gospel singing narrators – who thinking about it must have had a big influence on the Muses in Disney’s Hercules – strutting around Skid Row with candy-coloured dresses and bouffant hair, shoo-shooing, doo-wopping and finger-snapping the audience through the story of Seymour Krelborne and the strange and interesting plant that revitalises the fortunes of the ailing flower shop in which he works, making him a minor celebrity in the process. 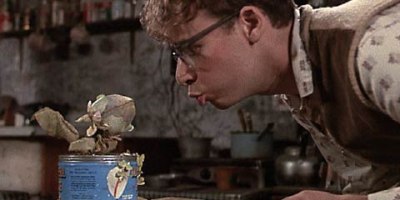 The strangest thing watching it as a fully fledged, proper grown up, as opposed to a small, almost certainly very annoying child, was trying to figure out what chimed with me at that age and wondering if those were the same things that still chime with me now. Firstly, the set – Skid Row – to some it might look dated, a relic of a studio-era of musicals that aimed to create a theatrical look. Backdrops clearly painted, all the action contained within a few set-ups, buildings looking fairly flimsy, the tram-cart skirting the back wall of the set, but all wonderfully artistic and with that pleasing, handmade feel that makes old Disney cartoons so appealing. I remember seeing a 35mm print of the aforementioned Aristocats a while back and being totally moved by the sight of pencil lines jumping off the screen, same thing. I don’t know, maybe I’m just a luddite, but I quite like seeing something on film and being able to recognise the craft that went into making it. As much as I love films that make use of computer animation, they just don’t have that same quality.

And hey, remember the days when Rick Moranis could be a romantic lead?! You know, nerdy, socially awkward Rick Moranis?! I mean, he’s a clumsy husk of a character in this film. He wears stupid clothes, lets people walk all over him and has an impossibly unrealistic crush on a beautiful, damaged woman – Audrey. Where’s that leading man nowadays? Seth Bloody Rogen? Well, at least Seth Rogen’s characters are wise-cracking, confident everymen who can sell a lot of weed. Moranis has got literally nothing going for him! Zero! Bubkis! Nada! And yet you have faith that Audrey will see that he can take her out of her horrible life – and it is horrible, the film pulls no punches there in depicting her abuse at the hands of her semi-sadist boyfriend. Oh sure, Steve Martin’s performance is electrifyingly hilarious, but the guy’s pure evil – musicals so often don’t go for the jugular when tackling social issues, tip-toeing around them instead, but when Martin’s character demands Audrey get into her house, calls her a slut and we see her silhouetted being belted six ways to Sunday… that’s brave filmmaking, wherever it occurs, but particularly in a musical. 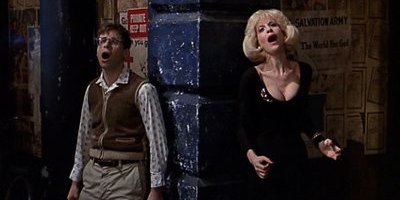 What makes a cult film then? So much fanboy-dom (not a word, don’t care) is wrapped up with the idea of “I like this thing, I like this thing more than you like this thing, I really wish you’d never heard of this thing so this thing and me can be together forever because anyway you’ll never understand this thing as much as I understand this thing” – incidentally, people who think like this are unequivocal bellends who should be banned from consuming any form of art, or food or drink for that matter. Cult films are kinda the opposite, the feeling that you’ve seen something and have a personal connection with something, and you want to indoctrinate someone else into that, to make them feel the way you feel when you watch it, to share your nostalgia and give them an idea as to the person you are – Lord knows that’s what I wanted to do with the person I saw this with. Films like this are warming, comforting, old friends moving like ships in the night. If you haven’t seen Little Shop yet, I really hope you do, and if you have already…well, go say hello again anyway, for old time’s sake.

Next time in Best in Vue, we’ll be talking about the original Evil Dead – if you want to see Sam Raimi’s gory masterpiece onscreen, you can find your nearest participating Vue here and see the full list of films here. See you next week!

Previous: Ghostbusters 3 will be out next year, apparently.
Next: Gus Van Sant makes SEX REEL

Tags :Back in VueHighlightsLittle Shop Of Horrors