Back in Vue #6 – Ferris Bueller’s Day Off

We’re going to do a weird thing today. We’re going to recommend that you check out Back in Vue’s screening of John Hughes’ beloved Ferris Bueller’s Day Off. But we’re also going to warn you that, this time, you probably won’t like it. 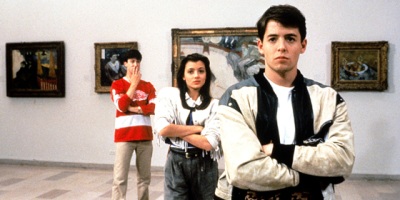 We all wanted to be Ferris. He was smart, he was beloved, he defied his superiors, he had a model-hot girlfriend, and – crucially – he got away with everything. Gekko Schmekko; no one embodies the “Give me everything, give it to me now, and screw everyone else” attitude of the 1980’s like Ferris. He wants to drive that Ferrari, mack on that girl, lead that parade, and as for the consequences? Eh, they’ll iron themselves out. The mileage on the car won’t matter, and there’s no chance anyone will spot him on telly. And who cares as long as we’re getting what we want?

But we’re in a totally different climate now. We’re still deep in an economic recession caused by exactly the kind of attitude that Ferris embodies. If they made this film today, it’d be a heavy-handed analogy that ends with Cameron’s dad coming home to his ruined Ferrari and beating him to death. Cameron is us, you see, but we’re no longer in a position where learning to ‘take it easy’ presents any kind of benefit. That carefree guy who bunks off school and cons his way into fancy restaurants is now just a leech on society. Watching Ferris Bueller do his thing in 2013, I didn’t admire him; I despised him. He’s a self-obsessed, manipulative bully, and unapologetically so. In fact, I bet he eventually schmoozed his way onto Wall Street, and is in some way responsible for the financial collapse of the Western world. You did it, didn’t you? Answer me! Bueller? Bueller? BUELLER?! 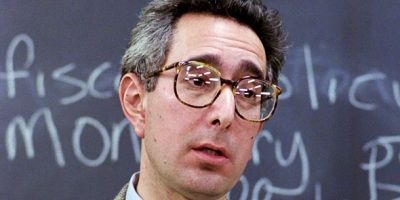 Look, I’m not going to sit here and tell you that you won’t enjoy revisiting Ferris Bueller’s Day Off. Jennifer Grey’ll make you curse the nosejob that killed her career, Jeffrey Jones and Edie McClurg have great chemistry as Rooney and Grace, and Charlie Sheen’s cameo packs more charisma into three minutes than everything else between that and the words “The run I was on made Sinatra, Jagger, Richards, look like droopy-eyed, armless children.” Leaving aside his problematic screenplay, John Hughes at the very least shoots Chicago to look like the most appealing place on earth. And there are scenes that rival the best of his formidable body of work – the police station, the back of the bus, “Mr. Peterson”. And maybe your parents invested in something clever in 2006, like online takeaways or touchscreen glass, and maybe you can literally have whatever you want without consequence, and so you’ll probably still love Ferris. Perhaps you two can go and murder the homeless for sport together.

But unfortunately you’re more likely to leave the cinema feeling sour. Even with the best of intentions, an homage to taking it easy on the way up feels like a sick joke on the way back down.

That concludes our Back in Vue series – thanks to Vue for having us and to the crushingly inevitable passage of time for making a past for us to gawk at. You can still catch Ferris tonight – to find your nearest participating Vue, click here, or to see the full list of films in the series, click here.

Previous: Terminator 5 picked up by Paramount
Next: Behind The Candelabra