You have to look past the obvious to appreciate this film. You need to forget the fact that it is essentially about a vertically challenged man taking a piece of jewellery up a mountain with the intention of chucking it into a roiling pit of lava. You need to forget that on this journey he is helped by a dwarf, an elf and a wizard and accosted by legions of pointy-eared orcs who turn to cannibalism when they’re hungry and angry (who hasn’t felt like that?). No, this isn’t the latest version of World of Warcraft; this is Lord of the Rings and its message transcends all else. The message is: “Even the smallest person can change the course of the future”.

I have to attach a disclaimer to this. If you are not a fan of fantasy-adventure films then you might find Return of the King tough going. Not only do you have to have seen the previous two films, but Return of the King is almost three hours long, if not a little more. A good deal of it is sweeping shots of lush New Zealand landscape and grisly battle scenes. Adversely, if you live for that sort of thing then you’ve probably seen The Lord of the Rings already. If not, WHY NOT?

It looks pretty. Palaces, elf dwellings and towers of evil were all made in model form and then edited into the final shot to make them appear larger. It’s a piece of camera trickery that pays off, big time. The result is places like Isengard and Sauron’s lair appear grand, imposing and malevolent. And each place has a tone and feel. Rohan, one of the main dwellings of humans, is earthy and layered with browns, greens and greys. Gondor in comparison is a glacial creation of white, blue, silver and black. Towns in Middle Earth are as diverse as towns in the real world.

On to the acting. Sadly, none of the actors were recognised at the big award ceremonies for their work, despite the fact that everyone – notably Elijah Wood, Sean Astin, Andy Serkis, David Wenham, Billy Boyd, Miranda Otto and Viggo Mortensen – acted their faces off throughout. Mortensen in particular, who was brought in to replace a departing Stuart Townsend as the tortured and fearless Aragorn, could have easily looked out of place. But he handled Aragorn coming into his own with panache and fully put his own stamp on it. In the film’s final set piece, he delivers a speech to an army just before leading the charge on Sauron which is as equally rousing as Mel Gibson’s pep talk in Braveheart. At the end of this he smiles warmly to his friends as though no one told him there’s a war on, and whispers “For Frodo”. A mere two words but it says so much: that this is what all of their troubles have been for; that this is what all our investment as an audience has been for. After that he goes into full on ass-kicking mode and stomps the snot out of any orc who crosses his path. Like Andrex, he is the perfect mix of strong and soft (and has one of the best character entrances OF ALL TIME in The Lord of the Rings, but that’s another film). 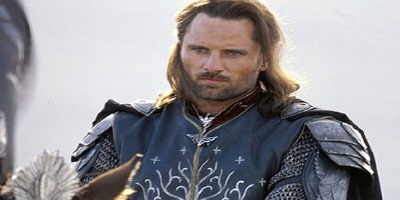 Wood, just eighteen years old when the first film in the trilogy hit cinemas, brings Frodo’s story full circle with aplomb. Where Mortensen was dark stares, snarling and a bit of (quite nice) singing, Elijah was far more expressive; all eyes and voice. A saga as large as LotR was needed a strong protagonist to carry the plot and make us care about his fate come the end of the final film. As someone who hadn’t read the books by the time RotK was released, I was on tenterhooks when Frodo and Sam entered Mount Doom and tussled with Gollum on the cliff edge. My reaction would not have been so positive if I didn’t care about Frodo and, vicariously, his best mate Sam.

In Return of the King, Samwise Gamgee (played by Sean Astin), is betrayed by his best friend and finally comes into his own, taking it upon himself to finish Frodo’s journey. When the two are reunited, Astin is single-handedly responsible for one of the film’s most touching moments. I won’t give it away here, otherwise there’s no incentive for you to watch it. 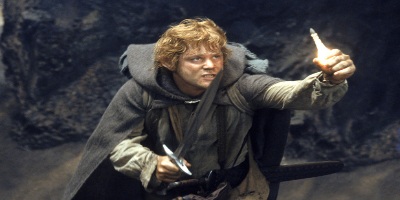 Sam launched a thousand fanfics as Frodo’s loveable and fiercely protective companion – fanfics in which he and Frodo are more than friends. Plenty of films have prompted women (and some men) to choose to write about same-sex characters in a steamy encounter (The Prestige, Inception, Fantastic Four: Rise of the Silver Surfer) but these have been fleeting dabbles. Return of the King, and the trilogy as a whole, has staying power in this respect because the characters, and the actors who play them, have become so well-loved and iconic.

Until The Lord of the Rings came along there were few fantasy films on this level of epic-osity. Blade Runner was probably the benchmark. Where RotK succeeded was by having heart amid the special effects and camera trickery. In the year it swept the board at the Oscars, it was up against the likes of Mystic River, Lost in Translation, Seabiscuit and Master and Commander: The Far Side of the World. RotK isn’t grounded in reality like the other nominees, but that’s exactly what set it apart and made it better than the other films in the same category.

If you want a film that LITERALLY has everything: action, adventure, sci-fi, romance, drama, mystery and at times a touch of horror; I implore you to check out Return of the King. Ideally I’d say watch Peter Jackson’s OSCAR-WINNING trilogy in its entirety; but since we can only gush about one film, it’s this one.