What are modern action films? They generally fall into two categories: machine-worshipping tech fetish like the Transformers and Fast & Furious franchises, and man-on-mission body-counters beloved by the star of this week’s BFFFF, Jason Statham. Truthfully, great modern action can’t be seen at the cinema. Films like Transformers and Fast Five obey archaic laws of the medium, building up steam to set-pieces, and it’s easy to see the pistons at work, slowly gathering enough momentum until the big payoff is inevitably met. Excitement, adrenaline and surprise might cross the faces of the characters on screen, but it rarely makes the jump to audiences, who know it all by heart.

Video games are different. As technology has developed, games have become increasingly cinematic while retaining the malleability of the medium. The most popular titles have gone to the furthest lengths to provide an immersive experience unlike anything cinema can produce. Arguably the most potent example of ‘do anything’ sandbox-style gaming is Rockstar’s Grand Theft Auto series. Anticipation is reaching fever pitch for GTA V in 2013, so let’s take a timely look at a film that gleefully recreates its lawless mayhem and pays respect to the history of a medium usually seen as cinema’s enemy. In 2006 Neveldine/Taylor dared to teach an old dog some new tricks, and for a brief moment the action movie seemed revitalised. 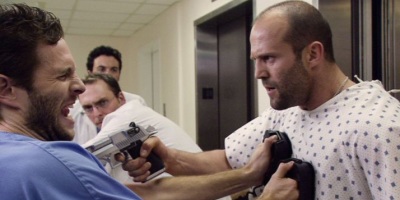 Crank isn’t traditional in any cinematic sense. By replacing Jason Statham’s usual arsenal with run and jump buttons, directing team Brian Neveldine and Mark Taylor hit on a fantastic idea and retooled the action film as a hyperactive arcade game by way of GTA. Hitman Chev Chelios (Statham) awakes to find himself poisoned by small-time thug Ricky Verona. With his life speedily ebbing away, a quick call to Doc Miles (Dwight Yoakam) reveals that unless he keeps his adrenaline levels up, he will perish. You stop, you die. It’s an 8-bit maxim, and captures Crank‘s energetic wit and impish mayhem in a nutshell. Chelios has about an hour left in which to settle some scores, say goodbye to his girlfriend and go out in style. It’s a setup that makes for breathless viewing, and there’s just enough room for Neveldine/Taylor to play fast and loose with Chelios’s drugged-up perspective, along with his game-like ability to survive anything as long as he keeps his life-bar aglow.

Wisely eschewing backstory in favour of pure personality, Chev Chelios needs no explanation, nor does he need to explain. Maybe Wreck-it Ralph will give us a greater insight into the psychological state of video game characters, but for Chelios, existing is the whole deal. He’s an avatar like GTA‘s Tommy Vercetti or Niko Bellic, L.A. is his sandbox and he’s played by an extremely pissed-off Jason Statham. He may star in a number of risible action films, but Statham’s always good value. And he’s a perfect fit for Crank, being so resolute in his capacity to exist in the public consciousness as a cheeky action star, he’s transcended acting to become a brand unto himself. He’s Mario, he’s Sonic, he just needs a mission to be repeated and replayed ad infinitum. Crank is his finest level. 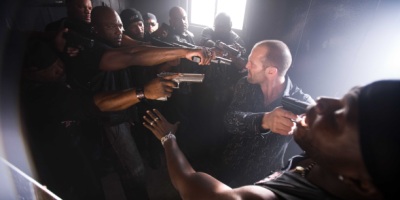 Crank‘s formal genius is what elevates it well above the rest of Statham’s canon of work. It’s decisively not just another action film because its debt to video games is so apparent, and Neveldine/Taylor exploit the fusion of the two separate media to glorious, brain-frying effect. Shot in high-contrast colours that seem to steam off the screen, it’s a daytime trip around L.A. that recalls the cartoonish commotion caused in Falling Down. Thankfully it leaves Michael Douglas’s middle-class self-righteousness at the door and forgets attempting satire in favour of amped-up absurdity. Employing a camera that gets around, inside and up close to everything, Crank would be a headache worthy of Michael Bay if it wasn’t grounded in the unerring purpose behind Chelios’s destruction.

Along the way to a final showdown with the big boss who conspired against him, the anarchy caused by Chelios in aid of his ailing heart is ninety minutes of uninterrupted perfection. From getting freaky with his girlfriend in front of a cheering Chinatown audience to receiving more than a kick from a pair of charged defibrillators, the humour that underpins Crank keeps its boundless energy exhilarating instead of exasperating. It never goes so far as to become overindulgent in its ceaseless creativity, as the sequel did. And even then Crank 2 was awesome. Crank is as urgent, fleeting and fun as a coin’s worth of time on your favourite arcade game, completely relentless until the inevitability of a flashing Game Over sign. And once it’s over? Just hit Start to play again.