At one point in his career, it seemed that the Kiwi-turned-Australian Russell Crowe was destined to be typecast as a brutish thug. L.A. Confidential and The Insider were his first big roles, but it was as legendary badass Maximus Decimus Meridius in Gladiator that landed the Aussie firmly inside of our hearts, right next to that cholesterol deposit. Winning an Oscar for the role, probably for the scene in which he makes love to Joaquin Phoenix‘s neck with a rubber knife, Russell Crowe didn’t rest on his laurels. His next big role was as schizophrenic mathematician John Nash in A Beautiful Mind. Despite the film taking rather large liberties with the truth (damn you pesky facts!), Russell Crowe’s performance was spectacular, and dispelled any suggestions that he was a one trick pony. The Insider, Gladiator and A Beautiful Mind earned him 3 consecutive Academy Award nominations, which is something of a monumental achievement.

It was around this time that Russell Crowe began to get a reputation of being a badass outside of his film career. Well, not so much badass as “consummate celebrity dick”. The first brawl that gave Crowe a taste for human blood was in 2002, when he got into a scrap with a businessman in a Japanese restaurant in London. The fight was broken up by Ross Kemp, proving that if God exists, he has a sense of the ironic. Here is an artist’s rendition of how we imagine the altercation went down: 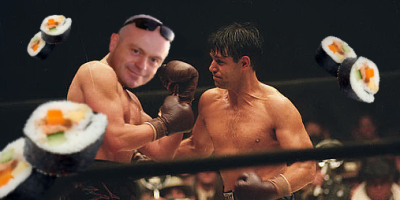 Russell Crowe did nothing to dispel this image of himself. In 2005 he was arrested in New York after he threw a telephone at a hotel concierge. Crowe was charged with fourth-degree criminal possession of a weapon – the telephone. The man turned a telephone into a lethal weapon. He’s’s evidently a colossal prick, but you have to admit, Crowe’s got style. He’s like Sammo Hung, except he hasn’t starred in a porno alongside Jackie Chan (that we know of). This all came to it a head when South Park parodied his attempt to punch his way through the human race one face at a time, via Russell Crowe’s fictional TV show Fighting ‘Round The World. Crowe at least showed that he was aware of the mocking, but rather than laughing it all off, he took the opportunity to douche-out. Here he is mumbling on about “fighting his way through life from small-town Australia”. GROAN.

Russell Crowe’s box office returns haven’t been great since the phone chucking incident, and he now lacks the pulling power that he once had. Robin Hood, for instance, was only met with mild enthusiasm, and there haven’t been any big hits to rival his early successes. But stop right there! We may be at the start of a Russell Crowe renaissance! The Man With The Iron Fists is complete wank, admittedly, but Crowe was mildly entertaining as the Lucy Liu-licking Jack Knife. On a brighter note, his upcoming role as Javert in Les Misérables has been widely praised. Combine that with his roles as Jor-El in Man Of Steel and in Darren Aronofsky‘s biblically wet epic Noah, and one can safely say that Russell Crowe has a shining future ahead of him.

Russell Crowe has a long list of random facts that boggle the mind. Speaking of minds, Crowe has donated his brain to medical science when he kicks the bucket, something neuroscientists will be glad and confused to receive. In 2001 British secret agents had to place guards on him after the FBI suspected that al-Qaeda plotted to kidnap him, which is distinctly odd. We can’t imagine the strategic importance of holding Russell Crowe for ransom. Perhaps al-Qaeda just really hated Gladiator. 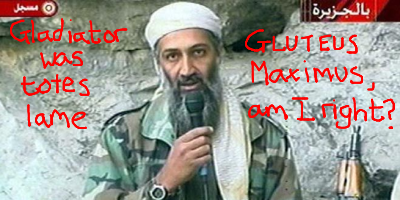 His music career as alter-ego Russ Le Roq has turned quite a few heads (usually towards the toilet bowl). Russell Crowe is no Bruce Willis, if we’re comparing him to other A-listers with musical ability, but he can at least hold a melody. This “raw talent” is sure to have been a deciding factor in him getting the Les Misérables job, but we will always remember the unforgettably sinister Weight Of The Man:

Russell Crowe reached the pinnacle of his musical career in 2003 when he wrote a song about Jodie Foster, entitled Other Ways Of Thinking, which sounds like nothing else on Earth. His very first single as Russ Le Roq was called I Want To Be Like Marlon Brando, even though he later admitted that he had never seen a Marlon Brando movie. Oh Russell Crowe, you cad!

He was offered the role of Wolverine for the first X-Men film, but turned it down, suggesting his friend The Jacked Man Hugh Jackman for the part instead. We all know what magic happened next, so we must thank Russell Crowe for kick-starting Hugh Jackman’s career – it’s probably his finest contribution to the world of cinema. Can you imagine a world without Hugh Jackman? 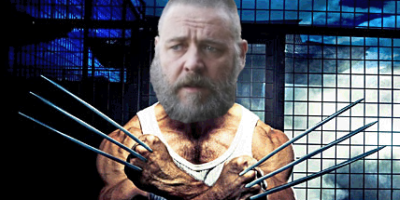 The most revealing of all Russell Crowe facts is that he endorsed the infamous (and thankfully squashed) sequel to Gladiator. Written by Nick Cave (yes, THAT Nick Cave) it chronicled the saga of Maximus after his death. Awaking in the Afterlife, Maximus proceeds to beat the shit out of all the Roman gods, who grant him eternal life as a reward. Maximus returns to Earth, and the film continues in Forrest Gump-style historical revisionism, where Maximus participates in every major war over a 2000 year period, eventually ending up working for the Pentagon. This utterly rancid script, this complete bollocks, this embarrassing turd of a script appeared to be decent enough to Russell Crowe’s shattered mind that he instantly jumped on board. Universal thought that the idea was too ridiculous, even for them, and they quietly shelved the idea. 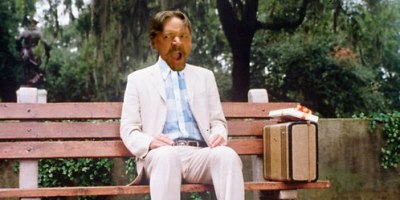 “Don’t close your eyes,
Turn your face to the sky,
Breathe as deep as you can,
Your strong heart won’t break,
Are you ready to take the weight of a man?”
– lyrics from The Weight Of A Man

“Russell Crowe perfectly captured the pathos of living with severe paranoid schizophrenia in A Beautiful Mind, which was far superior to his more “mainstream” roles that the Great Unwashed are probably more familiar with. Let them sup at the opiate that is Gladiator, we know where his true talent lies.”

“Hey Russell, do you mind playing us a song or two? 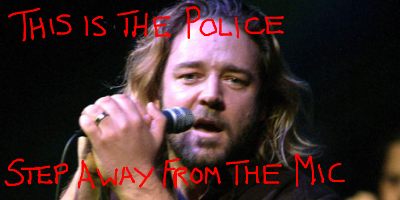 As interestingly uneven as Russell Crowe’s career has been, he is undoubtedly an acting powerhouse. He seems to have mellowed in his personal life since his conviction for the “phone throwing” incident, which is almost a bit of a shame – we all looked forward to the latest episode of Fighting ‘Round The World with Russell Crowe. That being said, he seems to be moving back into the world of prestige once more. If he pulls off Les Misérables, Man Of Steel and Noah, he could be known as one of the greatest actors of our time. Maybe just give the microphone a rest, Russ? Please?

How awesome is Russell Crowe? What are your favourite Crowe films? Let us know in the comments below!