One thing you must always remember whilst watching this film, is maintaining morale. There’s a lot of crying, dying and general battle cries going on. So during those rare uplifting musical numbers (like, what, twice?), you must dance and sing and glorify in the fact that you are still alive and very much drinking yourself to oblivion. Unfortunately because the film has only come out today, you may have to sneak in your bottle of Archers under a coat. You didn’t hear it from us though…

Every time someone looks like they haven’t had a bath in about 3 years. This is 18th century Paris, no one is bathing apart from the aristocracy and they’re probably not either. If you’ve ever wondered why everyone is so miserable, it’s probably because their eyes are weeping from the smell of the streets.

Every time someone sings instead of talking. i.e. Russell Crowe, whose songs are pretty much spoken the whole way through. You’ll need a stiff drink to put up with that.

Every time someone dies. Okay, so we know there’s a revolution going and all that, probably best to just have a few mini sips each time. Or if you’re having a hard time counting each death, perhaps just take a sip when you think someone’s dying. They probably are. 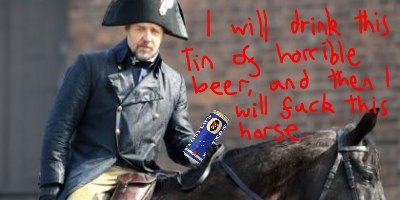 Every time someone looks miserable Now we know you’re thinking this is a bit of an odd one, but trust us, it does happen. If you can get through this without falling over blind drunk then you can do ANYTHING!

Every time Fantine says ‘dream’. There are a lot of dreams being dreamed, or, the same dream being dreamed multiple times. Safe to say this is a dangerous one.

Every time Eddie Redmayne’s lips get in the way of his acting. Come on now, Eddie, are they even real? 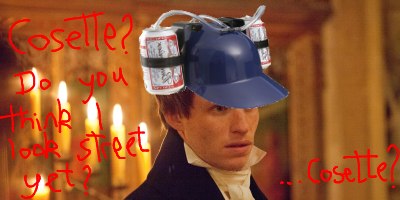 Every time someone has a radically revolutionary haircut. Drink to commemorate Anne Hathaway’s long-lost flowing locks that have been brutally tortured. Helen Bonham Carter also appears to have a plant growing fruit in her hair and there are a lot of haphazard-looking prostitutes wearing hay instead of a wig.

Every time you hear the people sing, singing a song of angry men. Can you still hear the people sing or are you too paralytic to even register if the film’s still on or not? We’d also like you to raise a toast to the barricades and for a world you long to see.

Every time Hugh Jackman misses the opportunity to take out Javert with his claws. Because why WHY would you just not? “Oh, so you’ve got the entire police force behind you, have you Javert? Well, I have knives in my hands.” 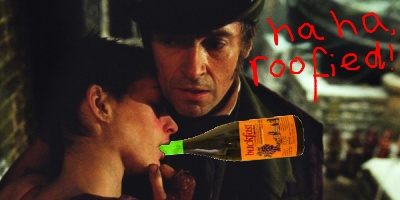 DOWN IT YOU ANGRY MAN:

Every time someone smiles.

Disclaimer: if you accidentally drink so much that you overthrow the French government, it wasn’t our fault. Have fun!

By Carlotta Eden and Flossie Topping