We all love a zombie film. We all love poking fun at zombie films because we’re too terrified to think that one day zombies might actually exist. They don’t, yet. If they did we wouldn’t be around to write this drinking game for you because we’d be hiding in a bunker, clutching a bottle of Smirnoff, crying. Let’s all drink and be thankful there hasn’t been an outbreak of some sort of deadly flesh-eating disease.

Every time a zombie moans
You’re gonna be smashed within 15 minutes of the film and we’ve barely even started yet. Perhaps we should have thought this through better… Oh well, just drink throughout the moan, please. Extra points if someone imitates a zombie to avoid being eaten and the zombie’s too dumb to notice.

Every time a zombie feasts on the flesh of the living
Standard.

Every time Simon Pegg appears in any zombie film
How’s that for a slice of fried gold? And if you don’t like Simon Pegg, well, who died and made you fucking king of the zombies? 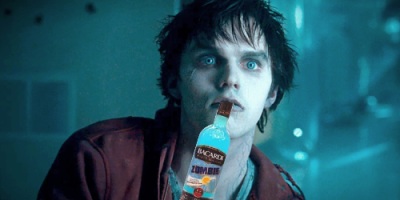 Every time the slut goes first/dies horribly
Because they’re SLUTS that’s why, and deserve their comeuppance. Extra couple of sips if they’re barely wearing any clothes.

Every time someone takes control of the situation and plans a revengeful attack on the zombies but essentially dies at the end
Poor sucker. This guy rules the roost, or bunker/basement/whatever you’re hiding in, and will rescue you no matter how life-threatening the situation might be. He teaches you bravery, skill and shouts at you when you cry. He’s like Coach Carter, only not as approachable. RIP.

Every time someone needs to use a gun quick and suddenly becomes an expert with an A.K. 47
What a dick’ed. I mean, how is this even conceivably possible? It’s not. So fuck you, gun-wielding yob. 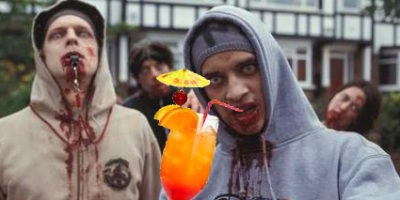 Every time a human turns into a zombie who you weren’t expecting to turn into a zombie
OH MY GOD did that just happen?! Extra sip if you already knew and/or guessed.

Every time Milla Jovovich narrowly avoids getting killed by a zombie, which is just ridiculous
Who do you think you are, Milla Jovovich? Milla Jovovich?! Oh, you are. Well… stop knowing how to do everything. It’s been almost 7 films, HOW ARE YOU NOT DEAD?

Every time someone shoots a zombie thinking they’ll die but they don’t BECAUSE THEY’RE FUCKING ZOMBIES YOU IDIOT
Who died and left this idiot in charge? Oh, that’s right. The guy who was in charge. No matter, this just means you’ll have to drink more. Take a sip with each failed bullet.

Every time Derren Brown thinks it’s okay to kidnap someone and tell them the world’s come to an end.
Because it’s not, Derren. 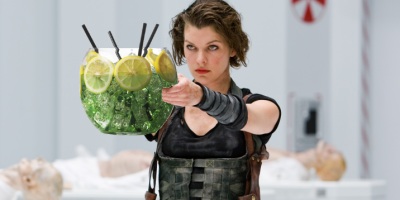 DOWN IT, INFECTED MUTANTS!

IF YOU’RE THE SOLE SURVIVOR, AND YOU’VE FOUND THE ANTIDOTE! 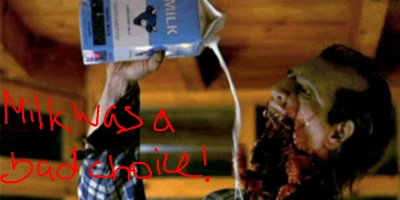 Is everyone dead? We hope not. We hope for your sake that you’re blissfully merry with all limbs still intact. Happy apocalypse-free weekend, everybody.