The Host and Dark Skies are now on show at a cinema near you. " />

The fear of an invasion undertaken by extra-terrestrials can be traced all the way back to 1898, when H.G. Wells put pen to paper and gave us the now classic sci-fi novel, The War of the Worlds. Hollywood latched on to the idea pretty quick (1951 saw the book’s first screen adaptation) and since then almost every decade has included some version of this idea. It was only a matter of time before we caught on to the plethora of trademarks and constructed a fitting tribute. Can you think of a better way to pay homage to the destruction of the human race than with a shot or two (or three, or four… we won’t judge) of your favourite liquor? No? Then get chugging!

Whenever you hear “They are coming!”
It will be said, somehow, somewhere, in a desperate whisper, a foreboding statement or a shout of terror. This is a staple of the genre and no matter what the iteration you must raise your glasses in acknowledgment of the incoming doom.

Every time the alien-possessed act detached and emotionless
‘Coz humans are apparently the only species capable of feelings. Vulcans, Pod-people and the newest addition, ‘Souls’, are supremely logical but completely incapable of a even the smallest temper tantrum. (Wouldn’t count on this heads-up being the least bit useful in the case of Monday morning commuters.)

When the aliens show off their superior weaponry/impenetrable armour
Force-fields, laser-blasters, plasma-guns, oh my! Since they’ve managed to make it through light years of space just to conquer little old us, it’s only fitting that they should bring with them heavy-duty gear that will knock us on our asses. Drinks must be consumed to honour the fallen humans! 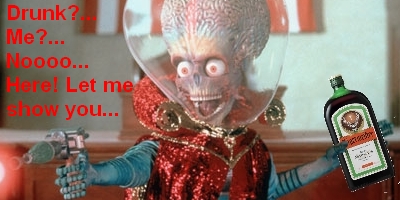 When an alien falls in love
This includes the befriending of a human child or getting down and dirty with either gender of Earthling. Aliens that look like aliens won’t bother, happier to blow your brains out than make sweet love to your anatomically incorrect body. It’s the benevolent ones, the ones that look perfectly human, that you gotta worry about.

When an alien is dissected
They’ve all got a weakness and one will come to an untimely end, thereby making the discovery of this Achilles heel child’s play at the hand of some handy sciencey-guy or girl. This is where the props department usually go wild in an effort to show off all their insane alien-building skills.

Anytime someone mentions ‘satellite’ (extra sip if it’s followed by ‘transmission’)
Even aliens need to talk. Most of them are pretty smart in keeping their methods of communication locked up tight (this of course will then call for a full-fledged assault to weasel the tech-wizard in) but occasionally they will lower themselves into using our inferior contraptions (a tech-wizard is still required but the likelihood of a tragic death is cut almost in half). 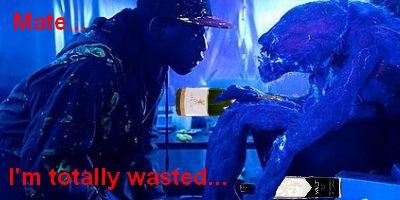 As soon as the reason the invasion is revealled
You can’t have an alien invasion movie without contriving a ‘reasonable’ reason for their sudden onslaught. Most of them are just a bunch of rotten thieves, getting us out of the way so they can steal our resources. Some of them are merely homeless, on the look out for new digs after having wrecked their own. But sometimes it turns out to that this is simply a rather nasty punishment coz we’ve been naughty children and don’t deserve the expensive toy.

If the aliens mode of transportation is saucer-like (extra sip if it happens to have a particularly silver shine)
All our alien friends lack of a bit of imagination and originality. That or there’s a huge hive-mind conspiracy they are unaware of, forcing them to build vehicles of a similar shape and form. Whatever the reason if you see something glinting in the sky, don’t just stare at it with your mouth open, RUN FOR PETE’S SAKE!

Anytime the word ‘mothership’ comes up
Also keep an ear out for things like ‘primary command module’. It’s the same thing, they’ve all got one and it will be the sole thing that the entire campaign is hinged on. Once you’ve put it out of commission, you’re work is done. Crack open a beer, sit back and watch them critters flee! 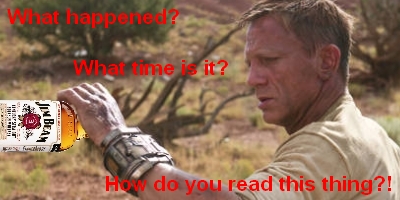 DEATH TO THE ALIEN SCUM!

When the alien invasion is brought to a screeching halt!
There are many ways to bring about an end to all this nonsense. In times like this it’s handy to have a nuclear missile lying around but if not you can devise an elaborate computer virus or concoct a crazy drug compound to get the job done. Then again, you might luck out and be blessed with a bunch that either missed out on the immunization against our pathogens, are deathly allergic to water or just have no tolerance for Slim Whitman’s, Indian Love Call. Either way, down your shot and give a sigh of relief that it’s all finally over.

So do your plans for this weekend include checking out The Host? If so you might want to smuggle in a bottle of JD and a copy of this to help you really enjoy it!

Previous: Iron Man 3 gets yet another TV spot; reveals nothing new
Next: RIP Roger Ebert