Dark Skies tells the story of a run-of-the-mill suburban American family with run-of-the-mill suburban American family problems – like having to share their home with a bunch of aliens. And, as if things weren’t bad enough, these are some of the MOST RUBBISH, CLICHED ALIENS EVER. Don’t believe us? Give it a watch and compare them to the Best For Film’s Top Ten Best Aliens and see for yourself. " /> 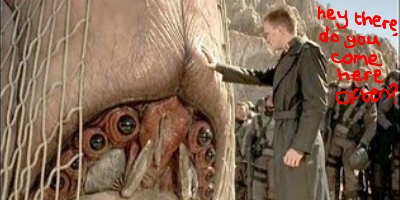 If you have a distaste for giant scary bugs that resemble giant scary vaginas then you really wouldn’t want to run into The Brain Bug in a dark alley. The Brain bug is the moist leader of an army of ruthless killing machine bugs from the planet Klendathu. The Brain bug is also so fat that he (insert any “Yo Mama” joke here). Director Paul Verhoeven took inspiration for the brain bug from a variety of terrifying sources including Lovecraft’s evil tentacled creation Cthulhu and (genuinely) Orson Welles at the end of his career. He is huge, soft, not very mobile bug with multiple spider eyes, a head that ripples to show his EVIL THOUGHT PROCESS and the ability to emit a high pitched screaming noise capable of bursting blood vessels in human heads. Impressively, The Brain Bug also has the ability to protrude a sharp appendage from his vulva-shaped mouth, penetrate your brain, consume your brain matter and absorb all the integral things in your head LIKE ALL OF YOUR KNOWLEDGE. Because of this last skill The Brain Bug wins the Best For Film Brainiest Alienest Bug award. 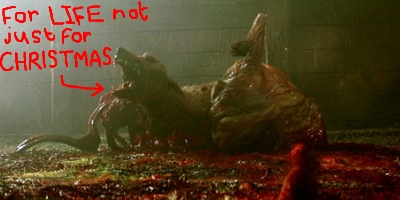 The dog from John Carpenter‘s The Thing is such a good actor! He looks so innocent in the opening scene when that guy’s manically trying to shoot him, so shifty when he creeps into the kennels and so believable when he horrifically transforms into THE PARASITIC SHAPE SHIFTER, APTLY NAMED: “THE THING”. This terrestrial life form has the power to assimilate and imitate other life forms.. so he could be in any of us. Luckily The Thing is really good at blowing his cover though, bursting out of folk and morphing the body he has imitated in a variety of deeply, deeply disgusting ways. If you see this happening then get out the flame thrower quick sharp as, once let loose in a civilised area, it is estimated that The Thing will destroy all life on earth in under three years. The Thing wins The Best For Film Alien With The Vaguest Name award.

#8 – Thomas Jerome Newton (The Man Who Fell to Earth) 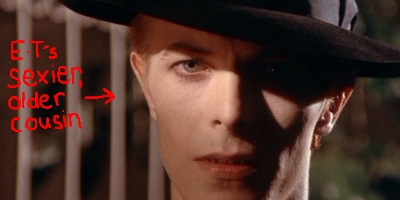 If all aliens had David Bowie’s androgynous sex appeal, beautiful bone structure and dazzling orange mane then the idea of an alien abduction wouldn’t be nearly as frightening now would it? Bowie plays Thomas Jerome Newton, a humanoid alien not unlike E.T’s sexy older cousin. He’s on the heroic mission to transport water from earth to his home planet before his alien wife and children die of dehydration. He has loads of intergalactic skills such as watching multiple televisions at once, really good hearing and succumbing to typical human vices such as sex and alcohol. Thomas Jerome Newton wins the Best For Film Alien We Most Enjoyed Seeing Naked For A Brief Moment award. 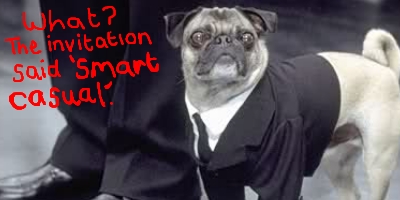 Okay, Frank the pug is irritating as hell, we think we’d rather have the parasitic shape shifter dog from The Thing as a pet, but we just feel like a talking dog is a welcome addition to any Best For Film Top Ten List. Frank, or Agent F to you and I, isn’t actually a pug at all, he’s a Ramoolian in a tiny, hairy, squashed disguise. He teaches us important things about life like size doesn’t matter, just because something is small doesn’t mean it isn’t important and that, if we doubt this logic, we should kiss his “furry little butt”. He would also make a great canine Karaoke companion if your song of choice is “I Will Survive” and you wanted everyone to leave immediately. Frank the Pug wins the Best For Film Alien We’d Most Like to Shake Violently for Information award. 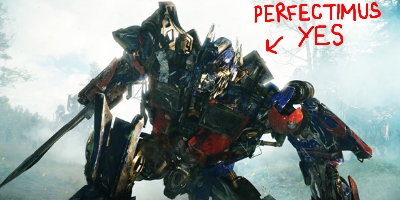 With a name like that Optimus Prime this guy had a lot to live up to, but man, HE DOES NOT DISAPPOINT. There’s a reason why he’s not called Mediocrus Okay: respected and adored leader of the Autobots from the planet Cybertron he is 32 foot of the bravest, wisest and coolest alien ever. Optimus can teach us all a thing or two about being good humans: he even said he would sacrifice himself to save mankind by placing the AllSpark in his chest to prevent the Decepticons from gaining the power to transform everyday road vehicles into evil alien weapons. We constantly wish our car would transform into Optimus Prime, but unfortunately we’re stuck with Megatron, who is no fun at all. Optimus Prime wins the Best For Film Greatimus Bestimus Alien award. In stardate 2285 Captain James T. Kirk (ie. Shatner himself) said of his long time buddy and trusted colleague, Spock: “Of my friend, I can only say this – of all the alien souls I have encountered in my travels, his was the most Human.” Kirk obviously hadn’t met The Thing (while imitating a human) and Thomas Jerome Newton (with his contact lenses in). However, he makes a good point – Spock is a Vulcan/Human hybrid so can rock his distinctly alien trademark bowl haircut, pointed ears and angry looking brows, while still being a figure we can relate to and look up to. Sure, we like Spock because he is one of the most distinguished and respected figures in the United Federation of Planets in his lifetime, but we mostly like him because HE REMINDS US OF US. Spock wins the Best For Film Alien We Would Most Like to Be Our Dad award. Chewbacca – or Chewie to his friends (ie. us) is definitely the biggest, gentlest, hairiest, cuddliest alien on the list. He is also the one most capable of ripping off a man’s arm if he looses at chess. Chewie was created by George Lucas after he saw his dog sitting in the driving seat of his car, and just like a dog Chewie would make a courageous, loyal and (because they live for hundreds of years) lifelong friend. What we wouldn’t give to join Leia, Luke and Han and be part of Chewbacca’s Wookiee honor family. Chewbacca wins the Best For Film Alien With The Most Heavenly Mane award.

#3 – Aliens seen through sunglasses (They Live ) In They Live the government is mind washing the population using subliminal messages hidden in advertisements encouraging us to ‘consume’, ‘submit’ and ‘obey’. It’s a documentary of sorts. Perhaps leaning into fiction only slightly when it is revealed that the people in command are also humanoid aliens with grotesque skulls for faces. The only way of discovering the truth for sure is to do what main protagonist Nada does: find yourself some 80s shades which are immune to subliminal messages and so will reveal the black and white totalitarian reality we are living in – try Ebay. Director John Carpenter made the aliens look like horrible corruptions of humans to represent the fact they were corrupting the human race, making us into mindless consumers devoid of independent thought. We’d tell you more but we must go ‘watch T.V’, ‘mate and reproduce’ and ‘sleep’. The Aliens from They Live win the Best For Film Most Politically Subversive Alien award. E.T may be an Extra-Terrestrial, but he’s just like us: he can be persuaded to go anywhere with a trail of Reese’s Pieces, he learnt how to speak English by watching Sesame Street and he gets a bit tipsy after a can of beer. But, more to the point, we too often feel ‘alienated’ on planet earth don’t we? We too just want to find ways to adequately ‘phone home’ and communicate with one another. More than that, E. T’s friendship with another species reminds us that we are capable of overcoming our differences and solve real world adversities once and for all. He also has a really funny little run. E. T wins the BFFBFF (Best For Film Best Friend Forever) award. 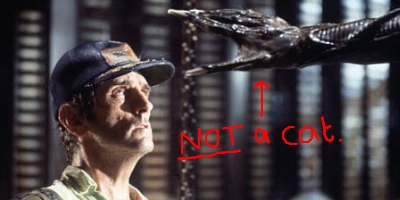 After seeing Alien you will never want to investigate the distress signal from a derelict alien spaceship, fancy a lovely hug in the face from an extraterrestrial or follow a cat in a darkened room again. You’ll just be happy chilling in hypersleep, thank you very much. It’s all in the name – THERE IS NO ALIEN WHO CAN BEAT ALIEN – Predator should have realised that from the beginning. Aliens have so many skills: they can implant parasitic embryos inside living human hosts which then burst out of their chests when they’re least expecting it! They’re also really hard to kill in space due to the fact they have extremely potent acid for blood. Put it this way, you really wouldn’t want to put a hole in Alien unless YOU WANTED A MASSIVE HOLE IN YOUR SHIP. This is intelligence that could give even The Brain Bug a run for his money. Alien wins the Best For Film Best Alien In The Whole Wide Universe award. Congratulations Alien! (Best For Film ask that you do not come and accept your award in person).

Are there any extra-terrestrials we missed? Let us know who would be in your Alien Top Ten below!

Previous: The Odd Life of Timothy Green
Next: Papadopoulos & Sons