Brand-new horror film Mama is out this week, dishing up enough eerie moments and unnerving children to send chills down the back of even the most hardcore horror fan. But do the feral children of this supernatural spookfest have what it takes to make it into our list of the top 10 creepiest children in film? Of course they bloody don’t!

#10 – Harvey Spencer Stephens in The Omen

What could be creepier than the son of Satan himself? Exactly. Harvey Spencer Stephens is a pro at squinting like a demonic bitch, driving into people with his little tricycle and, subsequently, inflicting a whole load of Final Destination style deaths (with a retro Seventies twist) on people he disproves of. Notably, priests and photographers. And, to make things even creepier, his birth mother was a dog. An actual, not-even-kidding-you-about-it dog. You see the canine skeleton and everything. If that’s not creepy, I have no idea what is. 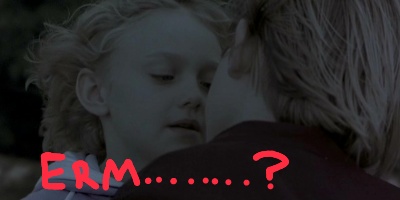 Oh sure, I could have gone with Dakota Fanning in Hide And Seek or, I dunno, Hounddog or something. But none of those are as creepy as the sight of a cute bug-eyed Dakota, at the tender age of EIGHT YEARS OLD, sucking the face off another unnamed (and therefore worthless) kid. And then, as if that weren’t a chilling enough sight, the pair of them then get struck by lightning and blown apart.

Blown apart from each other, I mean. Not blown apart to smithereens. But it’s still pretty chilling.

#8 – Asa Butterfield in The Boy in The Striped Pajamas 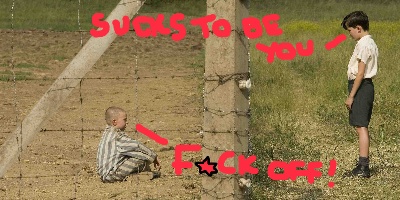 We’re supposed to like Asa Butterfield in The Boy In The Striped Pajamas, because he’s a little Germanic boy who befriends a little Jewish boy between the barbed wire fencing of the free world and a concentration camp. So I really tried to like him, I swear I did. However Asa apparently studied acting in the same school as a young Emma Watson (“ENUNCIATE EVERY SINGLE SYLLABLE, CHILDREN!”). And his character Bruno is a) an absolute dick for making fun of Shmuel’s predicament, b) an absolute idiot for disguising himself as a Jew and entering the camp and c) in possession of an absolutely awful name. Cue a new-found creepy fascination with Jewish culture and you have a recipe for disaster… 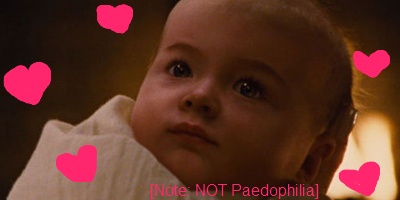 Mackenzie Foy had her face grafted onto a baby using CGI – creating, quite possibly, the creepiest looking thing ever to make it onto the silver screen. In a bid to rack up the creepy points, Mackenzie Foy as a baby locks eyes with Taylor Lautner, shares a vision of herself running with her hair down in the future snd succeeds in making him fall in love with her. As a baby. Which is, as I’ve said already, really very creepy. Unless, of course, you’re YouTube user Sarah Oliver:

“It’s not pedophila when he will protect the kid and love her. he’s going to be a brother, a friend, to her, he’ll be there for her when she needs someone, that is not being a pedoplia get your facts straight idoit, read the damn book [sic]”

We’d like to say “point well made”, but we’d be lying, wouldn’t we? We wholly support the fact that Jacob and Renesmee (what?) won the Razzie for Worst On-Screen Couple.

#6 – Taylor Momsen in The Grinch 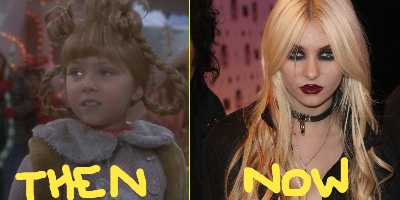 Taylor Momsen may be rocking the bad girl look nowadays (and, by ‘bad girl’, we mean she wears leather and has a nose ring), but she was, back in the day, an upstanding citizen of Whoville. And, sure, her little upturned nose and warbling rendition of “Where Are YoU Christmas?” may have got some people thinking she was incredibly cute – but the majority of us found her incredibly creepy. Why? Think nasal defect. Think terribly anti-festive attitude. Think inexplicable hairstyle. It’s all there, kids. And it’s all utterly unnerving. 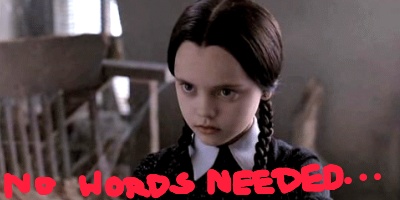 Christina Ricci does creepy at its best in The Addams Family Values, taking the blank expression and emotionless voice we know and love from the original film and adeptly hiding them behind a false “normal girl” persona. Not quite sure what I’m banging on about?

Never before has the line “I have decided to scalp you,” been met with such aplomb!

#4 – Macaulay Culkin in My Girl 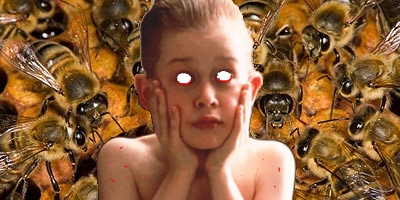 Macaulay Culkin is murdered by bees in this film. By bees. Imagine how mega creepy he would be if he came back for the yet-to-be-planned sequel as a shadow of the cute child he had once been, eyes sunken into their sockets, pale, spindly limbs and bee stings all over him. Modern day Macaulay could probably take on the role with very little assistance from the makeup department…

#3 – Lindsay Lohan in The Parent Trap 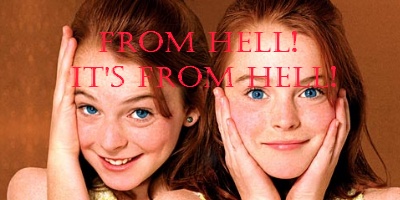 You know what? Lindsay Lohan, as a child, isn’t creepy. Even if she IS playing herself twice. I can handle that. Kind of, I guess – twins have always creeped me out a little bit since I saw The Shining. But, when you throw in the impact of hindsight, you can never really enjoy The Parent Trap for what it is; a fun family film. Instead, you see it as the first stumble on Lindsay’s infamous fall – nay, her PLUMMET from grace. On screen, she’s cheerfully reuniting her parents with the help of her identical twin. In real life, she’s facing the courts alone for something ridiculous, like stalking The Wanted (why Lindsay?) or driving a car into something. Again. 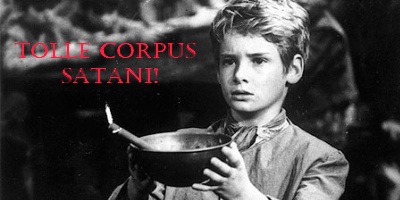 Oliver demanded more and then tried to win our sympathy when he found he’d bitten off more than he could chew, the little parentless idiot. So why is this doe-eyed darling, with the voice of an angel, on the creepy kids list? Because 1) he forges friendships far too quickly (we don’t believe his actions are genuine) and 2) he brings about the murder of Nancy, lovable redhead and probable prostitute. 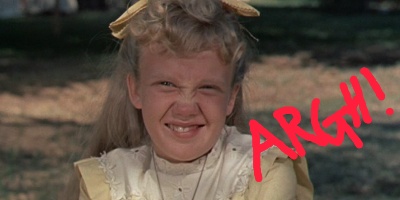 You know what’s worse than the son of Satan, a reanimated corpse covered in bee stings or a singing pickpocket? The orphaned child of missionaries, hellbent on tricking realists into playing The Glad Game. Which basically entails taking a bad situation, like being given a pair of crutches instead of a much-desired doll, and turning it into a good one, such as by happily declaring that at least she never needs to use them. Little did she know, eh? Pollyanna may have the whole town fooled with her optimistic attitude, but we see her for what she really is; a nosy little busybody, hellbent on one-upping the entire town’s personal miseries with her own crippled legs. Yiesh.

Which child star do YOU think is the creepiest? Why?