NB: two of the items below (signed ‘DVB’) were contributed by the lovely Duncan Vicat-Brown.

Before being part of the mob stops being a party, there’s a party. Obviously. After everyone’s rollicked for a while, Paul Newman and Tom Hanks sit down to play a haunting duet, which you think would kill the mood, but really makes everyone glow a little at the sight of such a loving, father and son like relationship. Even Newman’s actual son, Daniel Craig, cracks a smile, although obviously that’s just to hide his inner torment.
COMPOSER: Thomas Newman

It’s a bit of a reach to pull one piano related bit out of a film called The Piano. There’s the wild playing on a stormy beach. There’s the creepy tapping of the silver finger. But the biggest emotional punch is the scene where Holly Hunter’s Ada carves a keyboard on a table, so she can pretend she’s playing. But we couldn’t find a clip of that, so here’s the bit on the beach.
COMPOSER: Michael Nyman

After the bit of the movie where Bill Murray’s all depressed and existential about the fact that he keeps living the same day over and over and over, he gets all inspired by hearing some Mozart on the radio and immediately resolves to become a brilliant pianist. Which he does, one painful scale at a time. Which then leads to him blowing Andie MacDowell’s knickers off with his mad skills.
COMPOSER: Mozart

Understandably, Nicole Kidman’s Shannon gets immediately bored by playing Beethoven’s most popular dirge, Moonlight Sonata, and starts to play something more in the music hall line, shocking all of the fancy ladies, and caddish boyfriend, Greg, of the Dharma and Greg Gregs. Also, THEME: just as she’s musically escaping downstairs, Tom Cruise is physically escaping upstairs.
COMPOSER: Either John Williams or some actual band writer from ages ago.

Hausu is one of those films that you show people because they think that “weird” movies include things like Black Swan, or Army of Darkness. We could run off a laundry list of everything that happens in Hausu (“House”), but for the sake of brevity; there’s a bit where a girl starts playing a piano to cheer her friends up, because one of them’s been killed by mattresses. Then the piano eats her. (We can’t embed this one, so click the still below for the video.)
COMPOSER: Mickie Yoshino (we think) 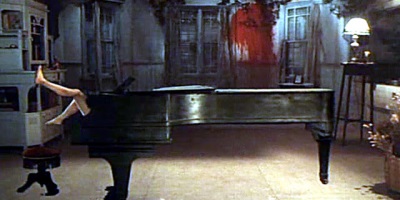 All ladies in costume dramas play the piano, obviously, but this one is special. Partially because it’s Helena Bonham Carter, aged fifteen, in her first ever film role, and partially because is just obviously the best. This clip doesn’t get to the good stuff until thirty seconds in, and then cuts of the end, because apparently YouTube users just entirely miss the point of everything, but after she’s done being all musically stormy, Simon Callow’s Mr Bebe says “If Miss Honeychurch ever takes to live as she plays, it will be very exciting both for us and for her.” THEME.
COMPOSER: Beethoven

Three teenage girls sporting pink balaclavas and holding shotguns approach James Franco/”Alien”/RiFF RaFF sitting at a piano beside a pool.
“Play something.”
“Whadday’all wanna hear?”
“Somethin’ sweet.”
Harmony Korine’s paean to teen mythologizing is essentially one long WTF moment, but it peaks with this montage of a sunset rendition of Britney Spears’ “Everytime” and a series of brutal, violent slomo raids, which in turns peaks with Franco repeatedly slamming someone’s face into a wedding cake. SPRANG BREAK.

Let’s all be honest about this one: it’s not a music scene. It’s a sex scene. Piano based sexery has been brewing for the entire film, with Nicole, Mia, and Matthew all letting their fingers run langouriously across the keys while pointedly looking at each other, and finally it reaches climax in the most inappropriate way, as uncle and niece writhe around each other to reach the keys.
COMPOSER: Philip Glass

DISCLAIMER: the following is not meant as a hatin’ on Britney thing. Britney remains the icon of white girls in the nineties and all we want for her is good. Having said that, the speed with which she picks up the little ditty her love interest, whose deal we honestly have no memory of, picks out for her, and the dexterity with which she then sings it, stomps all over our suspension of disbelief. Unlike the rest of the film.
COMPOSER: Max Martin, Rami, and Dido

This is one of the most joyous musical moments ever, in anything, ever. It’s highly likely that a puppet Dracula musical wouldn’t quite live up to the lofty expectations created by this scene, but who even cares. It’s beautiful and hilarious and it’s totes getting Jason Segel laid.
COMPOSER: he’s not credited, but we’re pretty sure it’s Segel

Missed your favourite onscreen piano moment? Let us know below!