(Editor’s note: this was an incredibly hard list to put together, with cracking films across the board at this year’s UK Jewish Film Festival. We made the decision to exclude some brilliant titles that, whilst they’re well worth a watch, will be familiar to many readers – think Waltz with Bashir, The Great Dictator and even Borat, probably the most rabidly anti-Semitic film ever to appear at the UKJFF. You really must check out the full list of films here.)

What better way to kick off this list than with a documentary about the most famous Jewish song of all? Hava Nagila! explores the history of the folk tune heard at a million Bar Mitzvahs, complete with interviews with everyone from Harry Belafonte to Regina Spektor. And Leonard Nimoy, obviously, because no film is complete without him.

Despite being Chairman of the Directors Guild of Israel, this film marks Yariv Horowitz’s feature debut after a career spent in music videos, TV and documentary filmmaking. Set during the First Palestinian Intifada, Rock the Casbah follows four young Israeli soldiers assigned to subdue an area from the roof of a family home in Palestine. Praised for its departure from the traditional ‘IDF good, Palestine evil’ tone of Israeli war films, this is set to be a stunning first feature from a deft filmmaker.

Director Yariv Horowitz will attend the screening on Nov 7th for a post-film Q&A. 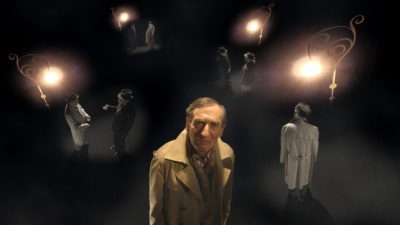 Legendary Glaswegian Jewish comedian Arnold Brown has carved out a unique niche in the world of surrealist stand-up over a career spanning thirty years. In this one-night-only project, he presents a new film project charting his comedy routes in Glasgow’s South Side, with chat show-style appearances from guests including Miriam Margoyles, David Schneider, Helen Lederer, Jes Benstock and others.

Bridging the narrative gulf between drama and documentary, No Place on Earth tells the incredible true story of five Jewish families who escaped Nazi persecution in wartime Ukraine by heading underground and hiding in a cave network for an astonishing 511 days. This film blends reconstruction with interviews with the remaining cave-dwellers to paint what looks like a spectacularly vivid picture of a survival story like no other.

Featuring contributions from Meryl Streep, James Earl Jones, Kevin Kline and dozens of other famous faces from film and theatre, Joe Papp in Five Acts is a loving tribute to the impresario who brought drama to the masses when he founded The Public Theatre and Shakespeare in the Park in post-war New York. A very rare opportunity to visit the tumultuous world of theatrical counterculture in the 1950s and 60s.

This one-off screening will be followed by a discussion between co-director Tracie Holder and US-born actress Zoë Wanamaker CBE.

Fans of Who Do You Think You Are, prepare to touch the face of God. In contrast to the period pieces littering this list, The Dead and the Living is a fiercely contemporary drama which tracks the endeavours of Sita, a young Berliner, as she crosses both Europe and history in an attempt to delve into her grandfather’s past. One of Best For Film’s rules of thumb is ‘if you’re German, probably don’t try to find out what Granddad did during the war’, but Sita’s unnerving discoveries are set to produce a taut and compelling film.

Director Barbara Albert will attend the screening on Nov 10th for a post-film Q&A.

First-time director Seth Fisher is the latest in a long line of filmmakers to be tipped as the next Woody Allen, but this time the moniker looks like it might stick. In barbed New York tragicomedy Blumenthal, Brian Cox (the proper one, not the star-gazer) stars as ponderous playwright Harold Blumenthal, whose abrupt death while laughing at one of his own jokes sends his family into freefall. Director Seth Fisher, who made the film with $50,000 raised on Kickstarter, plays Harold’s nephew Ethan, while Ethan’s father Saul (Mark Blum) is torn between wanting to expose his famous brother as a plagiarist and just wanting to have a satisfactory visit to the bathroom. This is going to be brilliant.

In 2007, Cardinal Emeritus Jean-Marie Lustiger died outside Paris. Six years later, his extraordinary story is about to be aired to the world. Lustiger was a Jew who converted to Roman Catholicism as a teenager and rose to the rank of Cardinal, becoming an intimate of Pope John Paul II and ruling the French church with a controversial ruthlessness. The son of Polish immigrants, Lustiger continued to self-identify as a Jew throughout his life and ministry, which came to a dramatic peak when he was forced to mediate between the Jewish community and a group of Catholic nuns who set up a convent within the walls of Auschwitz.

Yet another feature debut – this time by Israeli director Evheny Ruman – Igor and the Cranes’ Journey comes to the UK after considerable success at film festivals overseas. 11 year old Igor, the child of divorced parents, is forced to leave his ornithologist father and move from Russia to Israel when his mother gets a new job. But amid the confusion and trauma of moving continents, Igor’s connection with his father is maintained through the cranes they were planning to track together on their migration to Africa. Atmospheric and gorgeously shot, in a few years this will be on the DVD shelf of every intellectual with an outspoken interest in ‘world cinema’ – beat the crowd and see it now.

If you haven’t already, watch the trailer for this one before you read about it – it’s one of the most beautiful things you’ll ever see. In The Congress, presented in IMAX, Robin Wright plays a version of herself; an ageing actress who is offered the opportunity to secure her future by selling a perfect recording of her face, body and emotions to a film studio – along with a promise to never act again. We’re trying not to find out anything else about the plot, but it’s clear from the trailer that Waltz With Bashir director Ari Folman’s intuitive genius for animation is as visually arresting as ever – and with a supporting cast including Harvey Keitel, Paul Giamatti and Kodi Smit-McPhee, The Congress looks to be the perfect combination of artifice and raw talent. Unquestionably our top pick of the festival.

The 2013 UK Jewish Film Festival runs from Oct 30th – Nov 17th, and you can find the full listings here. See you at the cinema!

Previous: Top 5 films that should have kept it literal
Next: Thor: The Dark World saved by Whedon intervention