Top 10 Naked Royals in Film blog!! Unfortunately, the Duchess of Cambridge seems to have somewhat stolen our thunder by thoughtlessly going and getting herself pregnant in the same week, the shiny-haired ovarian witch. " />

Now with no further ado, and no further regard for the public accusations of Royalist strains within the BFF offices, I am pleased to announce the conception, germination, and birth of Top Ten Movie Pregnancies, which has absolutely NOTHING to do with Queen Kate and our future prince/princess. However, that said, WE’RE GONNA HAVE A LITTLE ROYAL BAYYBEEE!! Unless the extreme morning sickness is an early indication that lovely Kate’s tiny hips will be birthing a demon spawn, in which case, the Apocalypse is upon us. NOW.


Whilst it may now be de rigeur to mock, ridicule, and demean Hugh Grant, what has to be admitted, even through gritted teeth, is that he has been in some pretty darn good films through his career. Nine Months, however, is not one of these. Nine Months is for Hugh Grant what Did you Hear About the Morgans? was for… Oh yeah, Hugh Grant. And society. Nine Months was probably one of the first in a line of movies to bear the impressive accolade: the film that nearly sunk Hugh Grant. Except with all the silicone in his face, he just floats back to the surface like a bloated turd. So here, as a gift for those of you who would rather stick a pencil in each ear and stand in the doorway of a tube train that hear those foppish Anglicised strains, is an inexplicably hilarious Spanish dubbing of Nine Months, sadly eliminating Robin Williams‘ mystifying Russian accent, but adding a whole new layer of sass to the sassy black nurse.


Now the naysayers out there may claim that this does not constitute a movie pregnancy, as such. However, there is DEFINITELY a pregnant woman involved, and something DEFINITELY bursts out of her body in an explosion of blood, gunk, and screaming, and if that is not the definition of pregnancy then bring it up with my Sex Education teacher. An immaculate conception but not so immaculate a birth.


She’s pregnant? IT’S A MIRACLE! Children really are the future in this bleak dystopic sci-fi-flick starring rugged world-saver Clive Owen. In the year 2027, two decades of infertility have left the human species on the brink of extinction. In order to control the unprecedented levels of illegal immigrants seeking sanctuary in the United Kingdom, a militarised police state is established. However, it soon emerges that the fate of humanity could rest in the pregnant hands of West African refugee Kee. It then becomes Clive’s mission to protect Kee from the political tug-of-war she initiates. I like to imagine Kee is our very own Kate and Clive Owen will sweep out of nowhere to protect her from the evil forces of Clarence House. Early predictions are that the next topless shots of Kate will come direct from the grassy fields of Sandringham. (they probably have cows there, right?)


A BFF favourite is this timeless and classic tale of Boy meets Girl. Or, in fact: Boy Child meets Girl Child. They kiss. They separate. They reunite as adults. They fall in love. Quite quickly. Boy gets run over on the way to a cloning farm. Girl looks mournfully out to sea. Girl decides to clone Boy and give birth to him. Girl behaves in a series of increasingly more inappropriate ways towards Son/Clone of ex-lover. Son/Clone of ex-lover then rapes Girl calling her ‘Mother’. What a romp! Most shocking is the fact that Boy and Girl are played by Matt Smith and Eva Green. WHAT ARE YOU DOING, DOCTOR WHO? NO, DON’T DO THAT!!


You mean you’ve never heard of Inseminoid? You’ve never heard of the British science-fiction-horror-alien-insemination-classic?? You’ve never heard of Norman J Warren’s low-budget futuristic tale, originally released as Horror Planet in the United States, set in the ruins of an ancient civilisation on a distant planet and filmed in Kent??? Yeah, me neither, but it does include this unnecessarily long and horrifically graphic alien birth scene – skip to the end for the real juicy bits.

And for anyone that’s ever imagined what it would be like to fire lasers out of your vagina, here’s the poster for good measure. 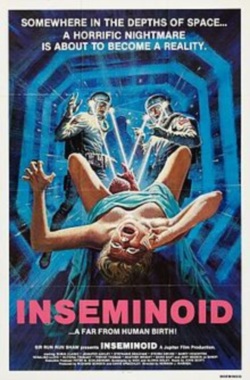 
The penultimate instalment in the frustratingly immortal Twilight franchise may have the most punctuated title in cinema history, but it is also remarkable for its vampire-human-hybrid pregnancy and consequent gruesome birth. The 12A rating means that the guts, gore and infant cannibalism present in Stephanie Meyer‘s book is tragically censored, but its all still a bit gross. Whilst YouTube refuses to throw up (no offence, Kate) any graphic action shots of the vampire spawn eating its way out of its regenerating mother whilst she spews a fountain of blood, all I can offer you is this trailer. Keep an ear our for the birthing scream that ends it.


A genuinely terrifying horror film with a genuinely hilarious script is hard to come by, but the 1968 smash hit Rosemary’s Baby is a perfect example. Mia Farrow‘s naive young housewife believes she is having her husband’s baby with the help of the meddling but harmless next-door neighbours. Unfortunately, much to her chagrin, they all appear to be part of a devil worshipping cult who have hijacked her body in order to birth the spawn of Satan. Well they’re off the Christmas card list.


There is no need to bang on about how good Juno is, that has been widely established and universally acknowledged. Here Ellen Page offers some sage advice for poor Kate on how exactly to deal with morning sickness. Expect the Queen’s speech this Christmas to be punctuated by cries of: ‘Oh, Kate, you haven’t perhaps barfed in one’s urn, have you?’


In honour of the month of festive joy and celebration, my number one movie pregnancy has to be the original immaculate conception. This 2006 adaptation of Matthew, Mark, Luke, and John’s classic The Bible actually has a really good bit in it where Mary’s pregnancy provokes the somewhat understandable assumption that she’s been rolling around in the sand with someone other than Joseph and she is threatened with public execution by stoning. We never did that bit at school… But then I was a way better Angel Gabriel than Alexander Siddig. And I wore a tinsel halo.

So, in conclusion, childbirth is awful. Alien birth is even worse. All you can hope for, Kate, is that your baby turns out to be the Son of God, and not the son of this man: 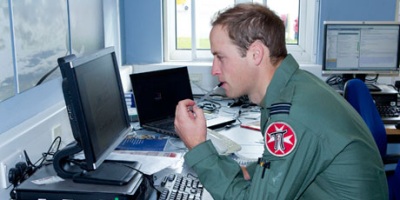 And hey, Kate, if all else fails, here are some handy tips from Hollywood.com FOR THE BIG DAY, featuring a highly suspicious voiceover in a very dodgy accent.

Previous: Trouble with the Curve
Next: Hot Tub Cinema – we dive into London’s soggiest screening