#10 – Think about your finances (Snowball Express) 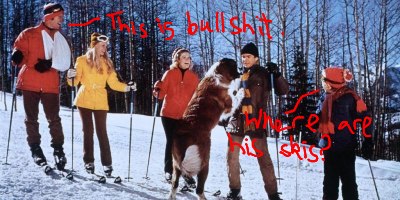 If, like the rest of us, you’re hoping to turn snow into gold, make sure you think carefully about your financial plans. For example, if you inherit a hotel and uproot your entire family to turn the derelict establishment into a thriving winter holiday destination, do NOT listen to a sinister solicitor hellbent on stealing an ancient Native American forest. ALL HE WANTS TO DO IS LOG THE HIGHLY VALUABLE TIMBER ON YOUR ESTATE, GUYS!

Then again, it could turn out that you own the entire town by default. In which case, ignore the above; nothing can touch you now, you snowy tycoon, you! 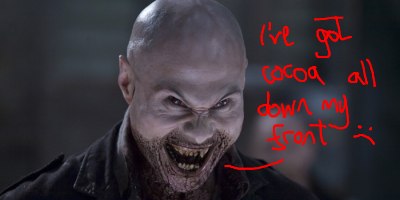 Sick of the cold? Spare a thought for the folks depicted in 30 Days Of Night; not only do they have to deal with thirty days of non-stop snowy polar night, but they’ve also got an unexpected coven of feral vampires on their doorstep. Snow joke. And, unlike the glittery idiots of the Twilight franchise, these fanged villains are pretty adept at causing mayhem; not only do they cut off all communication the town has with the outside world, but they also torture and eat people alive. All in sub-zero temperatures.

Worst. Snow Day. Ever. Life would certainly have been easier if these guys had kept their mobile phones charged, wouldn’t it?

#8 – Don’t get too attached to your snowman (Jack Frost) 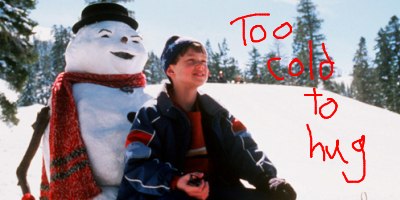 The snow is falling this week, which means that dead(beat) dads everywhere can return from beyond the grave and seek to forge a relationship with their estranged children. How? By listening out for a magical harmonica and taking it as a signal to possess a snowman.

Michael Keaton. As a snowman. As a SNOWMAN! Proving absolutely anything is possible and making a doomed-to-melt frozen friend more upsetting than The Snowman ever could. Do you want to cry on your next snow day? Of course you bloody don’t. Avoid all contact with animated snowmen in a bid to shield your heart from inevitable heartbreak… 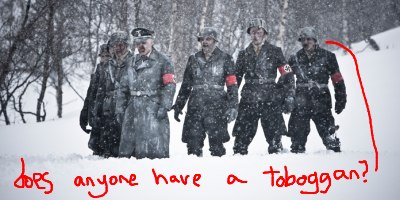 Planning a ski trip to make the most of that white stuff? Try and avoid areas rife with zombies – particularly when those undead shufflers are busily putting the ‘Z’ in Nazi.

This films sees a group of hapless students holidaying at a small cabin near Øksfjord over the Easter break. Cue lots of skiing, sex and hoards of flesh-eating Nazi-Zombie-Snow-Pirates. These reanimated SS corpses are hellbent on bagging as much treasure and brains as they can – and, as with the more normal living Nazi, there’s very little they’ll stop at in order to get it. So, if you CAN’T avoid Nazi burial grounds all together (and we know it’s tricky), at least try and avoid pickpocketing these WW2 dickheads’ treasure. It riles them up more than a red flag ever could…

#6 – Don’t do anything with scissors (Edward Scissorhands) 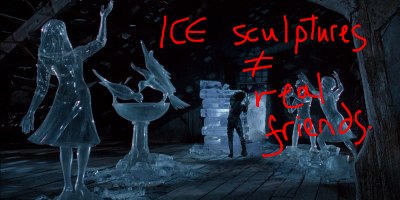 They say not to run with scissors, but what they don’t tell you is that scissors are two blades of catastrophe just waiting to snip down on your pelasant suburban lifestyle. All Johnny Depp wanted to do was make a bloody ice sculpture. And, for a few blissful minutes, he was doing just that – until Winona ‘It Fell Into My Bag’ Ryder got in the way. One little snip and, suddenly, the entire town’s after him with burning torches and pitchforks. Which is sure to put a dampener in anybody’s snow day… 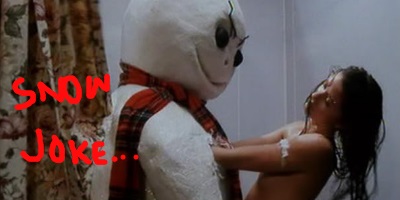 Did you know the human soul had a genetic signature? We bet you didn’t, you poor mindless schlubs. In this little-loved horror film, we see a serial killer explode into flames after a collision with a (you guessed it) tanker containing huge amounts of experiemental genetic materials. His remains are fused with the snow, he quickly becomes a murderous snowman rapist and wreaks serious evil upon the backwater town of Snowmonton.

So there we have it. Keep all potentially dangerous chemicals as far away from snow / dead bodies / snow-covered-dead-bodies as possible. Otherwise you MIGHT just see your boyfriend stabbed in the head and find yourself being raped to death in the shower by a snowman. Never a good way to end a chilly day. 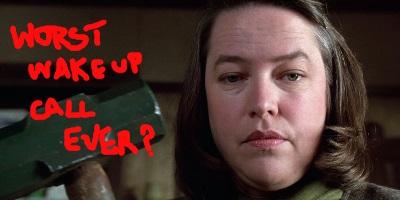 If you intend to go driving in the snow, be sure to stick to well-lit roads and gritted surfaces. If you don’t, you could find yourself in a sticky road accident and, just like James Caan, being nursed back to health by a maniacal Kathy Bates. Show some love to your ankles and drive safe, snow lovers. 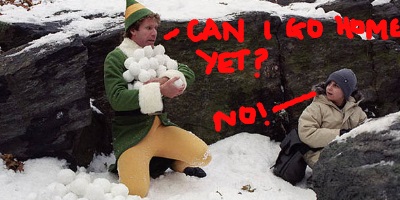 Snowballing always seems like a fun idea, until you find yourself with frozen fingers, a bruised eye and a compeltely battered ego. Snowballing is s**t. It’s always bloody s**t after the first few minutes, especially if you’re not winning. You know what would really enhance our tema’s prowess in the ball-tossing stakes? A fully-fledged member of Father Christmas’ crew. Tricky to come by, but an endless source of joy, we recommend lacing your mince pies with barbiturates in order to bag yourself your very own snowballing Buddy next Christmas. Or, failing that, you could always give Will Ferrell a call…

#2 – Keep a Tauntaun handy (The Empire Strikes Back) 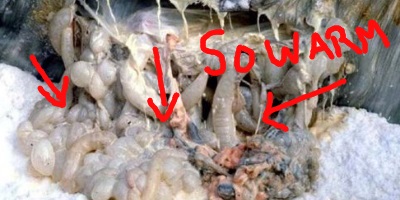 Luke Skywalker may not know how to keep himself warm in the snowy plains of Hoth, but Han Solo certainly does. Follow his lead and keep a tauntaun (sort of a half-lizard, half-yeti creature) handy and, when freezing temperatures get to much to handle, rip it in half, clamber inside and bask in all of that fleshy, bloody warmth. Nothing better than the smell of cauterised alien flesh in the morning, eh?

#1 – Wrap up warm and get some fresh air (The Shining) 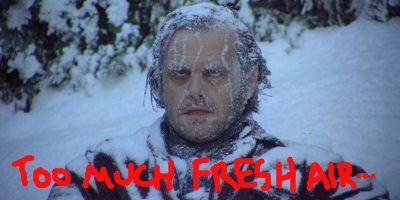 Feeling a little listless with all that snow in the atmosphere? For heaven’s sake, get your butt outside and enjoy the real out-of-doors world – you don’t want to end up going all stark-raving mental like Jack Nicholson in The Shining. If this isn’t an option, remove all axes, sharp objects and implements of destruction from reach, don’t stinge on the alcohol and try to avoid all contact with prophetic children. Bad times.

What’s your top snow day tip? Is it stupid and utterly useless, like ours?

Previous: Despicable Me 2 debuts the laziest trailer of all time
Next: Monday Face/Off – Nicolas Cage