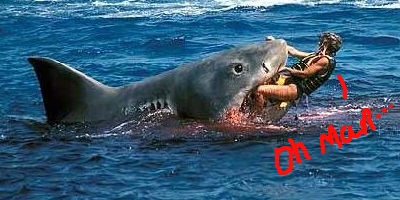 Oh sure, we know the way the sun bounces off that tranquil blue ocean is mega appealing, but we advise you to steer clear of this watery grave. Why? Because, quite frankly, it’s the SEA guys – and if there’s one thing we know about the sea, it’s that it’s bound to be riddled with toothy great white sharks. Absolutely riddled with them. Think shark soup, only less tasty and more deadly. And, even if there’s just ONE shark bobbing away out there under the surf, that’s one too many. Remember Chrissie Watkins? That gorgeous skinny dipper just wanted a moonlit paddle – albeit with a sexy finish – when she found herself the target of a gigantic, man-eating Great White beast – one which gets its kicks out of devouring impossibly hot blondes. How unfortunate.

#9 – Don’t murder / try to cover up a murder: I Know What You Did Last Summer 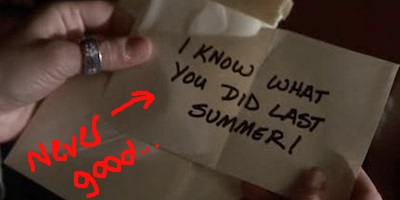 Murdering is mostly bad anyway but, if you really have to flex those killing muscles, try to do it in the winter. More shadows, less natural light. Basically less chance of anyone spotting what you did – because, when they do, the sun-soaked cow pats REALLY hit the fan. Think threatening letters, unexpected revenge killings, awkward conversations with ex-boyfriends and more. If Buffy the actual bloody vampire slayer can’t get away with murder / accidental murder / covering up a murder, then who can? Really?

Exactly. Guys, stay cool – and keep those murderous mitts to yourself until the clocks go back, ‘kay? 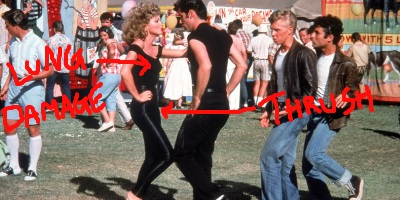 You know what’s really very genuinely bad for you? Smoking. And probably tight PVC catsuits. If you have to take up either to bag that badass boyfriend / girlfriend, then it’s time to think things through. Properly. Using your actual brain. Firstly, why should you have to change to win their heart? You’re awesome just as you are (probably) and the object of your affections should damn well realise that too. Secondly, puffing on a cigarette to “look cool” is so ridiculously uncool that we don’t even want to think about it. And don’t even get us started on the PVC – it’s the height of summer, y’all gonna give yourselves thrush parading about in that.

Peer pressure is bad, no matter how cool John Travolta and Olivia Newton-John might try to make it look…

#7 – Don’t go for a picnic on the beach: Chitty Chitty Bang Bang 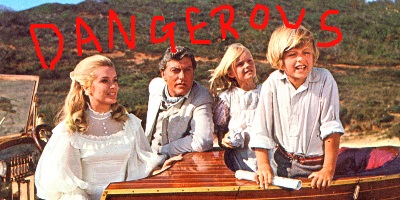 Oh you do like to be beside the seaside, do you? DO YOU?! Going for a picnic on the beach sounds like a great idea, until you’re attacked by Bavarian pirates, kidnapped and spirited away to a land where children are rounded up by a prancing ballerina and locked up in dungeons. Sure, it’s very unlikely – but it’s still a possibility. And not a possibility worth entertaining, in our opinion. Burn your picnic hampers and avoid the temptation; this shizzle ain’t worth your time. 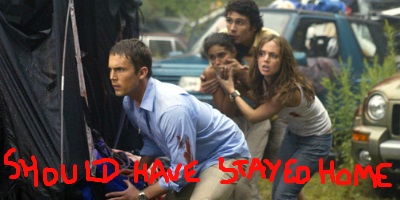 Trying to steer clear of beaches and bullies? Taking a road trip may seem like the perfect way to put the past behind you and explore the local area, but we’re here to tell you that road trips are an even worse idea than murdering a fisherman and hiding his body. We’re deadly serious about this one, kids; hitting the open road with a thirst for adventure is akin to lying down in the middle of a busy motorway with a ‘Road Kill’ sign around your neck. No sirree, road trips are bad news. And, unless you’re Eliza Dushku, we advise you to steer clear of them in a very big way.

It’s all fun and games until you get a flat tyre and wind up being eaten by disfigured cannibals, isn’t it? Roads and beaches are out, but what about the rivers? Yeah, rivers are great; you could just grab a canoe, gather up a few of your bezzie mates and explore that winding snake of water until the sun goes down. Great fun, glorious natural scenery and a sneaky way to enjoy exercise – what’s not to love? How about the inevitable inbred hillbillies, huh? All of whom want to shoot you and rape you to death, not necessarily in that order. NOT MUCH TO LOVE THERE, IS THERE?

Trying to top up your tan for the long sultry summer months ahead? We bet you are – but fake it, don’t bake it. Scientists have already proven that tanning beds can cause skin cancer, sure, but there’s one more compelling reason to steer clear of them:

Yup, you could literally burn to death. Let that be a lesson to you, wannabe golden girls. 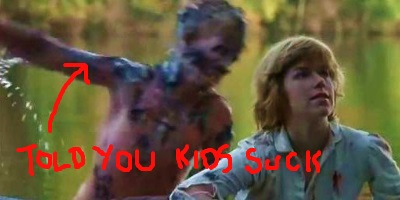 Working at a summer camp is perfect for outdoorsy types; from biking to sailing to campfire sing-alongs, there’s plenty here for you to get involved with. But you know what? We think you shouldn’t. Partly because children are awful, but mainly because you have to sacrifice your sex life to survive the experience. If you’re making love while a young boy drowns, woe betide you – and, worse yet, woe betide all other camp counsellors who come after you. The dead kid’s mum isn’t too pleased that fornication and fun killed her son and she’s out for serious retribution. With a knife. Oh yes.

Working with kids is a hazard, guys. Try to earn your keep some other way this summer, yeah? Going to one of the beautiful parks may seem like a great way to make the most of the warmer weather, but, as always, you’re onto a losing streak. Think mozzies, dog poo and grizzly bears. And we’re not talking Yogi Bear stealing your picnic basket – we’re talking a serious case of Pleistocene Arctodus Ursos Horribilis (that’s a reanimated prehistoric bear, standing at a whopping 15 feet tall, for those not au fait with their Latin). This bear will kill the shizzle outta you, with just a swipe of his migthy paw. And, worse yet, the only thing that’ll kill him is a bazooka. Got a bazooka handy? No? THEN STEER CLEAR OF THE PARKS, FOR THE LOVE OF GOD!

#1 – Don’t hang out with your friends: Cabin Fever / The Cabin In The Woods / Evil Dead / Scream / all horror films ever 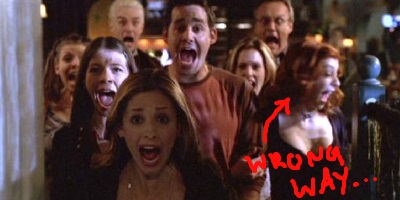 Everyone loves having friends, don’t they? Someone to hit the cinema with, cry over ex partners with, sexually experiment with or go shopping with, these guys are the ultimate companions to hang with when summer rolls by. Or are they? Let’s think about this logically; the more people you surround yourself with, the less likely you are to be picked off as a target. But, then again, the more people you surround yourself with, the more chance you have of becoming a peripheral character in your own personal horror movie and, therefore, dying. Horribly. And there’s always the chance that one of your besties could go absolutely berserk / get possessed by a demon / give in to previous insecurities and do a little bit of murdering themselves. Or convince you not to be a “chicken” and go swimming in shark-infested waters / camping in bear-infested woods / rowing through rapist-infested rivers / vacationing in zombie-infested cabins / sexing in flesh-eating virus infested bodies / smoke a cigarette. These bastards do NOT have your best interests at heart, okay? Ditch them and fly solo. Don’t have sex. Don’t go outside. DON’T DO ANYTHING UNTIL SUMMER IS OVER! Then, and only then, are you allowed to have fun again.

What else do you think should be avoided this summer? Is it zombies? It’s zombies, isn’t it…?