As you literally cannot have failed to notice by now, Disney have offered a hefty $4 billion or so for George Lucas’ production company, LucasFilm – and the rights to the Star Wars franchise. George Lucas, having destroyed his own work as much as humanly possible, quickly agreed to the price and history was made. Remember the scene in Star Wars Episode III: Revenge Of The Sith, where the legless, burnt out husk of Anakin Skywalker is retrieved from the flames of Mustafar and transformed into Darth Vader? Yeah. That’s essentially what’s happening here. Disney have swooped in, plucked the dying Star Wars franchise from Darth Lucas’ clutches and are intending to bring it back to life… for better or for worse, Episode VII will be zooming onto screens in 2015. Can we get a “nooooooo!” from anyone out there? Excellent.

Here are the Top 10 things we can expect from Star Wars à la House of Mouse: 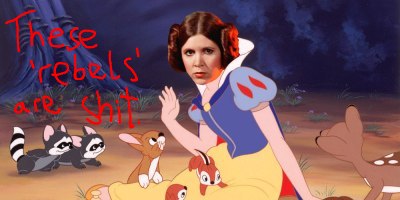 We have absolutely no idea where in the Star Wars timeline Disney are intending to drop us into, but you can rest assured there’ll be a princess of some kind. We’ve already seen the simply dressed and ballsy Princess Leia replaced as heroine by Padme, who was a bit more into pleasing her man and wearing pretty oh-so-pretty dresses. This time round, we’re bound to get ourselves a Disneyfied princess. Cue plenty of singing, some animal critter friends (where’s Jar Jar Binks when you need him?) and some serious falling-in-love action with the diamond in the rough. Han Solo, Anakin… Aladdin? 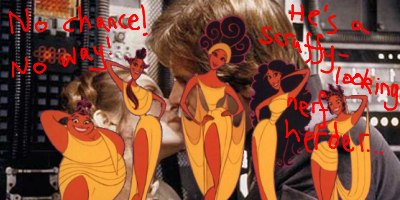 You know what Star Wars was missing? Singing. And that’s not because it didn’t have any place whatsoever in the sci-fi adventure flick, it’s because George Lucas is shit at music and lyrics. Thank goodness Alan Menken, Disney songwriter extraordinaire, is now on hand to fix this. After all, wouldn’t the “I love you… I know” scene between Leia and Han have been INFINITELY better with a soulful duet? You know it, bitches. Disney’s on dis ting. 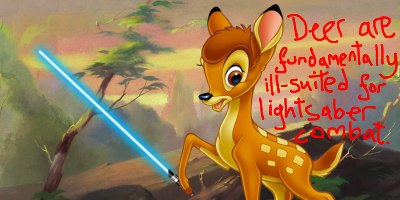 George Lucas, in preparation for this news some forty years ago or so, made sure that he included an orphaned hero in the Original Trilogy. Luke Skywalker had no ‘rents, he saw the burned out corpses of his loving aunt and uncle, he went on to greater things. A bit like… a bit like Bambi, really. Only with less visible upset from Luke. Disney need a bit more human emotion from their orphans, so expect the new hero to pass through the valley of darkness and mourning BEFORE heading off to train as a Jedi. 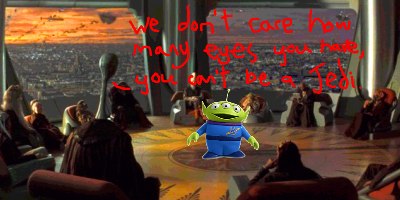 Disney LOVE a bitta animation and, if you take a look back over the Star Wars franchise, George Lucas was definitely coming round to the idea in a very big way – the less said about Blu-ray’s blinking Ewoks, the better. We’re willing to bet that there’ll be some lovable new characters to replace the likes of Yoda and co this time round. Maybe the Toy Story aliens could pick up the slack at the Jedi Academy, get folks learning about the Force and THE CLAW again…

#6 – The reappearance of Phil? 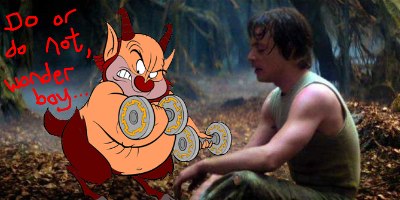 Yoda is dead. Get over it guys – he ain’t coming back, no matter how much magic and happy-ever-afters Disney may have up their sleeves. So why not bring back Phil, the coarse but lovable satyr from Hercules? He’s a seasoned trainer. He’s got guys written in the stars – and he sure as hell ain’t about to let a Jedi become the all time chump when there’s an all-time champ title up for grabs. Plus he has plenty of pithy one liners – and that’s all you really need in a coach, force or no force. All hail the mighty goat! 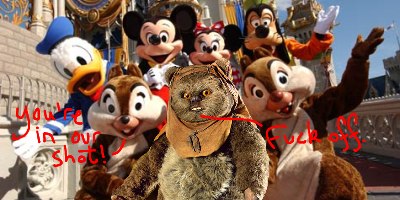 To be honest, if there’s a particular bit in Star Wars that Disney will love, it’s bound to be the Ewoks. They’re cute, they’re fluffy and they’re overwhelmingly feisty – just like the kittens in The Aristocats. Or the mice in Cinderella. Or the puppies in 101 Dalm… you get the picture. We bet Disney bring them back for Star Wars Episode 7. What’s more, we bet the little blinking bastards can talk this time round too.

If we’re picking up from where Star Wars left off in Return of the Jedi, then it’s safe to presume we need a new bad guy. After all, Darth Vader is now mere ashes after the burning ritual, the Emperor is an electrocuted heap somewhere at the bottom of a tube and quite a lot of stormtroopers are being used as instruments on Endor. Sick. So where’s the threat? Don’t panic – Disney are awesome at bad guys. Look at Jafar. Look at Frollo. Look at… I dunno, look at bloody Cruella De Vil. In fact, you know what? We think the bad guy might be a bad GIRL this time round – expect ugly wickedness on a planet far, far away.

#3 – The personal will prevail 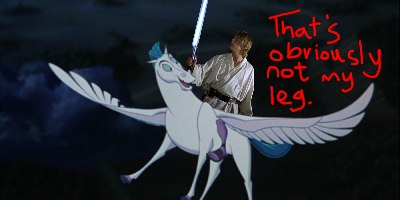 To be honest, as we work our way through this list of Disney stereotypes, we’re becoming more and more bemused by the fact that George Lucas was following them TO THE LETTER in his previous Star Wars films. And, yes, while Luke Skywalker was fighting on the behalf of space critters everywhere when he whipped his lightsaber out, there’s no denying that he was driven by a personal desire to know who he really was. Just like Hercules. And, weirdly, both of them discovered they had special powers left over from famous and unknown fathers. And then they both saved the world / galaxy – but only AFTER coming to terms with their identities. Spooky… 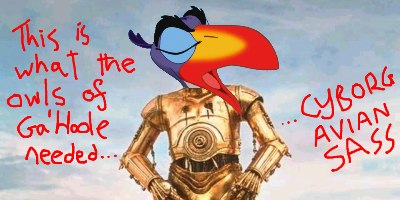 Every Disney hero or heroine needs some wise-talking sidekicks to hand – and, thankfully, this shouldn’t jar too much with the original Star Wars trilogy. Not following me? How’s about taking a good hard look at C3P0 – that robot is the definitive in sassy sidekicks. He’s even more sassy than The Lion King‘s Zazu… in fact, he IS Zazu! Just strip off the feathers, shove the Hornbill in a golden robot casing and voilà! Problem solved. Disney and Lucas can both sleep soundly in their bed of money tonight… 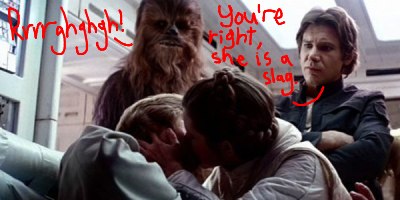 The Disney bigwigs may be a lot of things, but they’re not big advocates of brother-on-sister action. Well… not publicly, anyway. For that reason, Lucas’ strange relationship between Luke and Leia is one that isn’t likely to be repeated in the new Disney Star Wars films.

Then why the fuck did you stick your tongue down his throat in the last film, Leia, you perverted slut? This kinda behaviour is unacceptable now you have a Disney chaperone. Lucas is out, Mickey is in – and he doesn’t take too kindly to sexual perversion. Unless, you know, you’re watching The Hunchback Of Notre Dame. A smattering of IMPLIED rape is fine and dandy.

What have we missed out? What will you be expecting to see on the Micklennium Falcon? Let us know below!