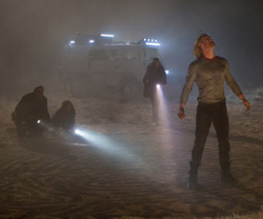 I’m going to come clean here: Thor looks like it might be the silliest thing ever. Yes its directed by Kenneth “remember when I was Henry V?” Branagh, yes it’s got Natalie Portman and Chris Hemsworth in it, and yes probably at some point someone will get smashed in the face with a massive LAD-hammer, but having seen the most recent clip (comedy electrocution, LOLZ) I’m not convinced it won’t just be utterly ridiculous. And the new pictures leaked online haven’t really done much to help.

Take a look at the hilariously over-dramatic screen shots below and draw your own conclusions. No Anthony Hopkins with golden eye-patch? Damn. Previous: Louise-Michel
Next: Meg Ryan to direct Into The Beautiful