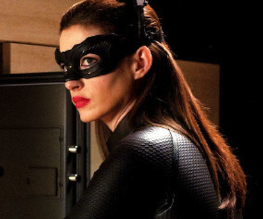 We kind of like the fact that we’ve hardly practically nothing from the Dark Knight Rises team for a while now. Sure, there was a whole kerfuffle when they finally released the trailer, but that was bloody AGES ago and we’ve practically heard neither hide nor “MFFGGHH” from Bane et al since. So it’s with actual, genuine INTEREST that we present you with 6 brand new Dark Knight Rises images (nicked from Bat-Man News). Sure, they’re not going to wipe your face off, but HEY IS THAT BATMAN WITH AN IPAD? Of course, we’ve still got plenty of time to get entirely sick of the whole thing, especially considering we STILL DON’T KNOW WHO JGL IS PLAYING AND DAMMIT WE DON’T WANNA KNOW (though we’re still gunning for Azrael, all this “John Blake” nonsense is just obviously nonsense). All in all these stills don’t really tell us anything we don’t already know, though we like the subtle metaphor of Anne Hathaway gazing into an empty safe, as if warning us about the barren box of acting talent she opens every day. And Bane doing literally anything sets our pants alight, obviously.

Is this all you need for now? Do you crave ever more? WHO IS JSL PLAYING? Talk to us