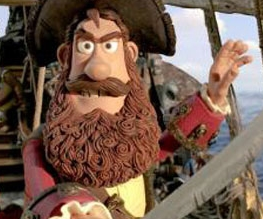 You remember Aardman studios, right? The hard-hitting scandal mongers who made anti-penguin thriller The Wrong Trousers, debunked rabbits as a whole in The Curse Of The Were-Rabbit and shocked the world with the truth about Santa’s family in the recent Arthur Christmas? Well, finally, FINALLY, someone is reining them in. The Chris-Morris-esque “leper boat” gag is being axed from Pirates! In An Adventure With Scientists, just in case people end up thinking that people who suffer from leprosy actually are made from plasticine, live on a boat and have limbs that fly off at random.

The trailer that featured the joke (the pirate captain landing on a boat, shouting for gold only to be told that “this is a leper boat” *cue arm falling off*) produced angry reactions from organisations including Lepra Health in Action and the International Federation of Anti-Leprosy Associations (ILEP), who complained that the joke was insensitive, not funny and that hardly any of them are forced to go and live on a boat anymore. They failed to mention that Queen Victoria (voiced by Salma Hayek) probably wasn’t a murderous, sword-wielding maniac – but presumably that’s a fight best left to Historical Sword Wielding Maniacs Anonymous.

Aardman, being the lovely chaps that they are, have decided to axe the joke rather than cause any modicum of offence:

“After reviewing the matter, we decided to change the scene out of respect and sensitivity for those who suffer from leprosy. The last thing anyone intended was to offend anyone and it is clear to us that the right way to proceed is to honour the efforts made by organisations like LEPRA and the World Health Organisation to educate the public about this disease.”

We also need to make sure that every copy of Life Of Brian is rounded up – surely those “any money for an ex-leper?” jokes display a huge lack of sensitivity for those still suffering from the disease? And while we’re at it, did Charles Darwin even go on a mission with a load of pirates? The whole thing should be shut down.

We’d say they were only pulling our legs, but frankly we don’t want to risk the fury…