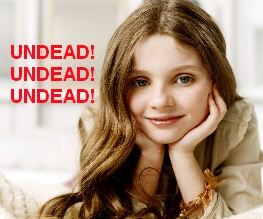 Abigail Breslin, the cute little whatsit from Little Miss Sunshine, has signed up to play a teenage ghost in Haunter, an upcoming supernatural mystery.

In a completely and utterly original plot, Lisa (Breslin) finds herself and her family trapped in their home after dying in sinister circumstances. Murder, perhaps? Murder’s pretty sinister. In fact, murder is the MOST sinister of all the circumstances, in our opinion.

Either way, they’re ghosts, and they’re trapped in their house. They find themselves unable to move on… until Lisa discovers that she has to reach out from beyond the grave to prevent a living girl from meeting the same terrible fate as her.

So… it’s like Beetlejuice then, is it? And The Others. And The Lovely Bones. And maybe The Sixth Sense. AND CASPER! Reverse hauntings aren’t quite as original as the studio would have us believe… but at least they’re being upfront about it. None of that “AND THEY WERE ALL DEAD ALREADY!” punchline business at the end.

It could be dark, it could be tense, it could be a little bit saccharine sweet – it’s hard to tell when the focus of the story is two young girls meeting and becoming BFFs, despite the fact that one of them is dead.

However, with Vincenzo Natali in the director’s chair and the always-fantastic Breslin in the starring role, we’re keeping our hopes way up.

Do you see dead people?

Previous: First Look At ‘To Rome With Love’
Next: Salmon Fishing in the Yemen