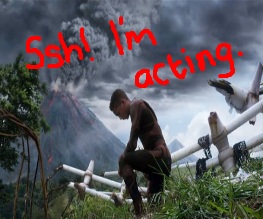 In the latest trailer for After Earth, the latest film from director M Night Shyamalan, Will Smith and Jaden Smith spend a lot of time running away from mental-looking creatures. Will Smith plays Cypher Raige, a stern Commanding Officer who crash lands on a deserted planet Earth with his son Kitai. Earth is now overrun with bizarre animals that have ‘evolved’ to kill humans, which obviously spells trouble for the Raiges.

Unlike in the first trailer for After Earth, we get a glimpse of the fractured relationship between Cypher and Kitai, so expect plenty of ‘emotional’ moments in which both Smiths can chew scenery and show off their acting chops. Sophie Okonedo pops up in this clip, warning Cypher to go easy on their son. We get to see Smith senior leap into action, too; as he grapples with Earth’s murderous new inhabitants using a lethal-looking spear.

After Earth will likely be a feast for the eyes in a similar vein to Avatar and its good to see Will Smith in a role that requires him to be more subdued and less shout-y. Jaden meanwhile, who is no stranger to the big screen by this point, will hopefully deliver a much more mature performance this round.

However, bear in mind that this is a Shyamalan film, which could mean a MASSIVE TWIST NO ONE SAW COMING. This will either be fabulous or the lamest thing in the history of lame things. We’re crossing everything that it’s the former.

Do you think the new After Earth trailer is any good? Let us know!