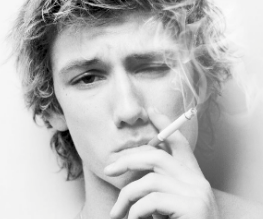 Whilst little R-Patz is at home sobbing into his pillow and listening to Beyoncé power tunes, hoeface K-Stew has managed to snare yet another man in her web of sex. It has been announced that shagaholic Alex Pettyfer will be joining her as her snuff-movie-making boyf in new film Cali which the skank is also producing.

Pettyfer and K-Sket will actually make a very good couple considering that he has shagged EVERY woman he has ever starred alongside and K-Stew is a heartbreaking hussy who can’t say no to a bit of cock. (Fact). Pettyfer is currently engaged to lesbian with werewolf tendencies , grandchild of Elvis, Riley Keough, and we hope that she watches her man like a freakin hawk to make sure that the home-wrecking tramp keeps her hands and her vagina to herself.

Also Pettyfer appears to be as painfully dull as Cali co star Jezebel McTrollop, saying once that “I don’t go out” and instead spends his time looking like a moody tosser. This means that they will have A LOT to talk about together off screen, possibly over a glass of wine late at night… Uh oh R-Patz! What little shards remain of your broken heart may once again get crushed underneath your cheating girlfriend’s heel as she runs to get into bed with Pettyfer.