Alex Proyas on board to direct Robopocalypse author’s Amped 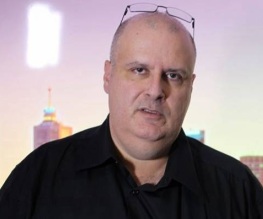 Alex Proyas is set to direct and adaptation of bestselling sci-fi author Daniel H. Wilson’s Amped,  after his  Robopocalypse recently became Steven Spielberg’s latest venture. Anything that pushes another Indiana Jones further into the future is fine by us, so we’re welcoming the news that Hollywood has found its next author du jour with which to test drive some new special effects. Michael Crichton can finally rest in peace.

Alex Proyas, who in no way resembles an angry thumb, last delivered one of Nicolas Cage’s more insane films – no small achievement – with Knowing back in 2009. I, Robot was a passable techno-conspiracy, and we all have fond memories of The Crow. The bottom line: Alex Proyas gets work. And he seems ideal for Wilson’s Amped, a bestselling thriller which sees a healthy dose of garden variety sci-fi pseudo-philosophy sprinkled lightly over a tale of ‘amplified’ humans with special abilities at war with the non-enhanced populace. What’s next, Alex Proyas – a film about genetically advanced ‘thumb-head’ metahumans facing off against their primitive counterparts?

Wilson’s particular brand of robo-centric sci-fi will see its first big-screen incarnation with Robopocalypse‘s slated 2014 release. Thor‘s Chris Hemsworth is set to star and Anne Hathaway is in talks to co-star. There’s been a dearth of what we’ll vaguely define as ‘proper’ sci-fi in recent years, with too much whizz-bangery and not nearly enough cod-philosophy! Let’s hope Alex Proyas and Steven Spielberg can use this material to once again make us question our humanity, regret playing God, and hook us up with some sweet chromium hooker-bots.

Are you amped for Alex Proyas’ vision? Comments below.

Previous: Obama not in new Movie 43 trailer, but everyone else is
Next: HIV drama manages to drag Jared Leto out of his hideyhole