Alice Eve may board the USS Enterprise for Star Trek 2 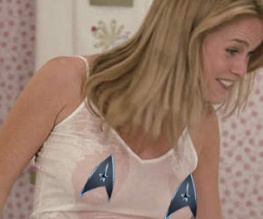 Unconfirmed whispers from Starfleet suggest that Alice Eve (currently best known for tarting around playing a nanny or something in Sex and the City 2, in which her breasts were substantially more memorable than the plot or any of the characters) may be joining the cast of J.J. Abrams’ Star Trek 2.

Eve, who is apparently Trevor Eve’s daughter (who knew?), also starred in She’s Out of My League and played the one who isn’t Rebecca Hall in Starter for 10. Neither of those films gave us the opportunity to stick the Starfleet logo over her nipples, though, so screw them.

Nothing’s confirmed, of course, but we suspect that Eve’s apparently-imminent casting may signal the end of the major cast decisions for Star Trek 2 – particularly if Benicio del Toro does end up starring as the sequel’s villain. Also, the rumour merchants claim that Eve will be playing a BRAND NEW CHARACTER OMGOSH! We hope it’s, like, a sexy alien.

Do you hope it’s a sexy alien? Obviously you do.