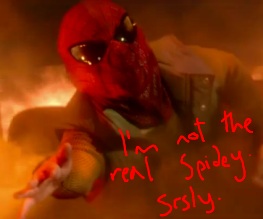 Continuing this year’s exciting new trend of never making us actually wait to see a film before throwing all the good bits at us, the ridiculous people at Marvel have released a four minute ‘super preview’ for their forthcoming reboot The Amazing Spider-Man. And it’s… it’s not all that, if we’re honest.

Seriously, we’re not trying to be difficult or cool or whatever – we’re really excited about The Amazing Spider-Man, and the new snippets of film in the preview just hammer home how good the film looks. But how much is actually fresh content? The big bridge scene (there’s always a big bridge scene) is largely new, but when all’s said and done it’s about a minute’s worth of interesting footage and a pile of stuff we’ve already seen before. Small knives? Done. Curt Connors being gnomic? Done. That interminable end shot of the tower falling onto Spidey in slow motion? Done done done. And if we see one more second of first person Spidey-vision we’re going to feed Marc Webb to the Venom symbiote.

It’s just a bit yawn-worthy, isn’t it? We’ll keep covering the Spider-Man promos because we’re weak and silly, but in our hearts we’re turning our heads and striding on without letting a flicker of emotion cross our faces. Just like with beggars.

Are you excited about the super preview? Please tell us why.