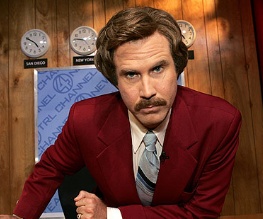 Whether the news makes you want to rejoice or reach for the scotch, it looks like Anchorman 2 is becoming an unstoppable force – with most of the original cast ready to jump back aboard.

Now, of course we want a sequel to Anchorman. Who doesn’t want to know more about the trials and tribulations of being the kind-of-a-big-deal that is Ron Burgendy? But the thing is, we’re not sure our souls could take a bad sequel. Imagine the pain. Will, you wouldn’t do that to us, right?

Director Adam McKay recently spoke to MTV about the prospect of Anchorman 2, and we can’t say we’re totally convinced by his words. Apparently its being set in the neon-glow 80s, and, well…why don’t you tell us more, Adam –

“That’s loosely what the idea is. It’s more the frame of it. We have this other, bigger, crazier idea that’s really more what it’s about, which I can’t say. Our thinking was there’s just no way the second one is going to be as good as the first, because the first one is the first one. So our idea is if we’re going to do a second one, we better go for it and try some insane stuff and we’ll be enjoying it and that way it can’t be half bad.”

Admitting your sequel wont be as good as the original is never a great idea in our book, and the words “try some insane stuff” doesn’t have us chomping at the bit either. But we’re still willing to hope. And pray.

What’s your opinion on the prospect of Anchorman 2? Let us know below

Previous: Get Ready For The Ring 3D!
Next: Hugh Hefner saves Hollywood