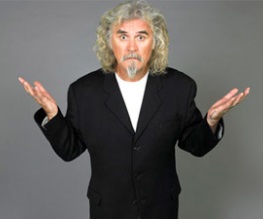 Iconic comedian and actor Billy Connolly has revealed that he is being treated for both prostate cancer and Parkinson’s Disease.

Glasgow-born Connolly 70, recently underwent surgery in America for the “very early stages” of prostate cancer, which his spokesperson said was a complete success. He is also receiving treatment for the early stages of Parkinson’s Disease, an absolute bastard of a degenerative disorder which can have a wide range of symptoms including tremors and memory loss.

Connolly’s representative confirmed that neither condition would be making the Big Yin slow down, with a TV series and a theatrical tour of New Zealand both in the pipeline along with appearances in the forthcoming parts of the Hobbit trilogy. Parkinson’s Disease is a very unpredictable condition, with no two cases alike – Back to the Future star Michael J. Fox is still working as an actor twenty-two years after his diagnosis, while Bob Hoskins blamed his retirement on Parkinson’s last year.

In recent months, Connolly starred in the Oscar-winning Pixar film Brave and the surprisingly charming Quartet, as well as filming his part as Dáin II Ironfoot for The Hobbit: The Desolation of Smaug, due out this Christmas. We’re so relieved. Although, to be fair, he did already know a lot about proctology: