Brad Pitt IS NOT The Gray Man 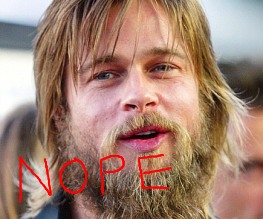 Brad Pitt has dropped out of languishing assassin chase flick The Gray Man. Originally cast in 2011, Regency obviously was in no hurry to make the distinctly Bourne-esque action thriller, and Brad Pitt doesn’t wait around? If you sign up a mega A-lister like Brad Pitt, you’ve got to get the ball rolling. That’s why World War Z started filming without any idea where the film was going or what the hell they were doing in Glasgow.

Based on a book of the same name, the proposed adaptation of The Gray Man features an ex-CIA agent turned assassin on the run in various locales. Were Brad Pitt to star in it, it probably would’ve looked like Mr and Mrs Smith if Brad Pitt had just killed Angelina Jolie like he should’ve done at the start of the film, saving everyone a lot of hassle, and had to go on the run for murder.

We admit that Brad Pitt dropping out of a film that no one particularly cared about is barely news worthy, but it gave us an opportunity to replay one of our favourite YouTube montages. Behold: Brad Pitt stuffing his stupid face for 2 minutes:

God he looks like a diabetic or something, doesn’t he?

What are your favourite Brad Pitt movies? Se7en? Fight Club? Troy? (God please don’t say Troy). Let us know in the comments below!

Previous: Jessica Chastain IS The Zookeeper’s Wife
Next: Gael Garcia Bernal is doing a thing in the jungle