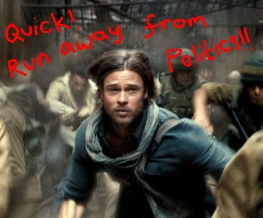 Brad Pitt has recently argued that zombie blockbuster World War Z got too bogged down with it’s political message, so much so, that it RUINED THE POINT OF THE FILM. Pitt produced World War Z and stars as Gerry Lane, who witnesses the zombie pandemic spread across the globe. Pitt has explained that he felt this concept was a good way to explore the current sociopolitical global situation, but that the film ended up focusing too much on this.

“At the time, I was really interested in a more political film, using the zombie trope as a kind of Trojan horse for asking, ‘What would happen to sociopolitical lines if there was a pandemic like this? Who would be on top? Who would be the powerful countries and who would be the most vulnerable?’ We wanted to really explore that, but it was just too much. We got bogged down in it; it was too much to explain. It gutted the fun of what these films are meant to be.”

Director Marc Forster reportedly cut some of the more political scene’s out of the film. But even so Brad is never happy! One minute it’s too political and the next it’s not political enough! Now he’s saying that, despite the more serious scenes being cut, we really shouldn’t think of World War Z as more than just a run of the mill zombie blockbuster. Make up your mind, Brad!

“These movies are very intricate puzzles, and you have to keep winding the mechanisms and then trigger them all at just the right time. We give so much more credence to the end-of-the-year dramas. In these movies you’re triggering emotions, too – a thrill response – but they are far more calibrated. You’ve got to be a bit of a technician.”

When World War Z is released on June 21st we’ll try our best to see it as just the right balance of brainless Zombie blockbuster and hard hitting sociopolitical exploration – don’t you worry, Bradley.