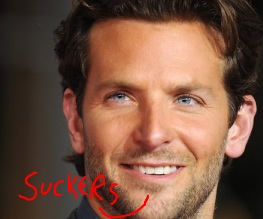 Charming, handsome, debonair, French-speaking Bradley Cooper is the latest rat to desert the sinking ship that is Jane Got A Gun (Bradley, you’re not really a rat, but metaphor yeah? You got it, we cool). First Fassbender pulled out, then Joel Edgerton was promoted (who gets promoted on a film? Films aren’t bloody Starbucks) and Jude Law was roped in, then Lynne “Moby Dick in Space” Ramsey quit (read: was drunk) on her first day, so Jude pulled out because he only wanted to work with her. In terms of clustercusses, this is up there with the best of them. Rumour has it that Bradley initially thought the film was called Janie Got A Gun, and was an adaptation of his favourite Aerosmith song, and that’s the actual reasons for his departure.

Until a new cast member can be roped in to fill Bradley’s undoubtedly expensive, designer shoes, it’s looking as if this film will never really get off the ground. Brad released a statement saying: “Regretfully, due to date conflicts between the film I am currently shooting for David O Russell and Jane Got a Gun, I am unable to join Natalie, Joel, Noah and Gavin on this truly exciting project”, which can be loosely translated to “Bitch, I don’t need this noise.” Fair play Brad.

Now the film is in limbo, indefinitely it would seem. Natalie Portman and Noah Emmerich are still attached, as is Joel Edgerton, with names such as Tom Hiddleston, Joseph Gordon-Levitt and Tobey Maguire being banded about willy-nilly as potential replacements for Coops, but to be honest, it wouldn’t be entirely surprising if all of Hollywood’s big leading men were readying their barge poles, just in case.

That said, Nicolas Cage is almost definitely interested. You heard it here first.