Bradley Cooper to chef it up in… Chef 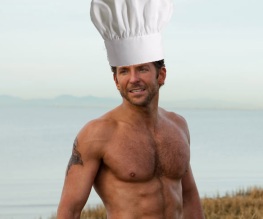 Bradley Cooper’s certainly doing his utmost to break away from the lookalike trio that is him, Matthew McConaughey, and Josh Lucas. “Look at me,” he cries from the rooftop of that ill-advised hotel in Vegas. “I can do all the things. I can be all smarmy and hungover in the desert. I can recover from a mental breakdown and stare at Jennifer Lawrence. I can be in the vicinity of pines, or whatever.”

And now the handsome man wants to show us that, as well as sniping things, he can cook. He’s signed on to play a 4 realz Paris chef who gets all addicted and falls to pieces. After sobering up he decides to build his own restaurant and chase after three shining Michelin stars.

He’ll be stewing snails and sautéing frogs’ legs (racist? Not racist? Who can say.) under the directorial whip of John Wells. Fresh from directing southern family drama, August: Osage County, Wells is most known for producing just loads of E.R. back in the day.

Coops’ll be squishing this one in between American Sniper, and potentially a Broadway revival of The Elephant Man, and whatever other tasty pies he’s shoving his fingers on into. We’ll next be treating our face orbs to his handsome face in The Hangover Part III. Which apparently has no wedding. So… Cool story.

Previous: Top 10 Glasses in Movies
Next: The Crow flies once more with boyo Luke Evans