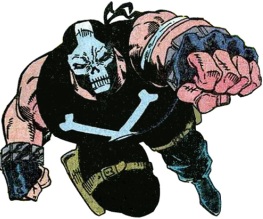 Captain America was great. Unusually great. Not ‘great’ great, but considering its relatively small corner of the Marvel universe, it was a rousing two steps forward for adventure and a mature step back concerning the more explosive tendencies of The Incredible Hulk or Iron Man.

It’s downright unfair that Iron Man gets all the money, the Paltrow and the kudos when (thus far) his enemies have been utter cack. True, we don’t know what Ben Kingsley’s The Mandarin will bring to Stark’s door. But after facing off against Mickey Rourke and Jeff Bridges, beating another old man into submission while wearing a rocket-powered exoskeleton just seems cruel.

Captain America embraced the more, y’know, comic-book-y tone of its source material in the villain department. Hugo Weaving as Red Skull was an utter grotesque, chewing the scenery as if he were a supernatural-obsessed Nazi asshole. Oh wait, that’s because he WAS. Seriously, let Tony Stark duel with someone who doesn’t ride the bus for free and we won’t begrudge him having access to fucking EVERYTHING. Including a spare set of keys to Nick Fury’s Hamptons estate. Probably.

This is all a long-winded way of reporting that Captain America‘s 2014 (boo) sequel The Winter Soldier has cast its bad guy, and he’s a doozy. Frank Grillo will star as Red Skull underling and Neo-Nazi Crossbones, who will face off against the good Captain as he struggles to assimilate in the modern world. It’s a shame Crossbones won’t have a Skull in tow, as Hugo Weaving has expressed no desire to reappear in the franchise. Grillo’s star is set to rise in upcoming cop drama End of Watch and Kathryn Bigelow’s Osama Bin-Laden death recap Zero Dark Thirty.

Previous: Stoker gets stunning new teaser and poster
Next: Student of the Year