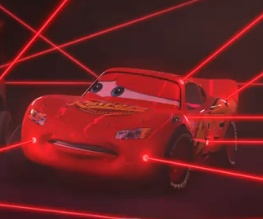 Now it seems there is split opinion when it comes to Pixar’s Cars – many people see it as the weakest of Pixar’s films to date (which, to be honest, is still a pretty high achievement), whilst others have praised the uniqueness of its concept and loved its nostalgic approach to the classic American landscape. We’ve known for a while that the studio have been working on a sequel, and they’ve just released their first teaser trailer. It doesn’t exactly give much away.

Though we can’t really make anything of this wee snippet, it’s certainly a surprise to see that they’ve taken the story in a “secret agent” direction. Considering Pixar have always been a studio that puts the story first, I’m sure there’s a good reason for it… right? At the end of the day, its safe to say that Pixar have yet to make a dud. And seeing as production is generally pulled from films they feel don’t make the standard (Newt anyone?) I can’t help but have high hopes for Cars 2. What do you reckon?