Charlie Sheen – big, brash, perpetually full of coke and punching hookers – seems like just about the most stereotypically American chap possible, doesn’t he? It’s quite easy to forget that he was born Carlos Irwin Estevez and only changed his name when he followed his father Ramón Antonio Gerardo Estévez (sorry, we mean ‘Martin Sheen’) into the film business.

Charlie’s brother, The Way director Emilio, has no problem repping his Spanish origins (neither do the other two Estevez kids, Ramón and Renée) – but then again, none of them have ever been the highest-earning actor on television – maybe there’s something in this ‘abandoning your heritage’ lark. From now on, you can all call me Brett Rockefeller-Racist.

Anyway, Charlie’s soon due to return to the big screen in his first proper role for a while – President of the United States in hotly awaited mexplo sequel Machete Kills. And some genius (presumably director Robert Rodriguez) has come up with a quite startlingly nifty marketing ploy. Check out this new poster (click, as ever, to go large): 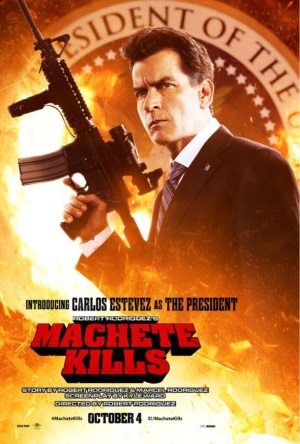 Lookit! We know this is a very simple joke, but it’s pleased us enormously. Plus, there’s the thrilling possibility that this isn’t just a tongue-in-cheek nod to Charlie’s ancestors – maybe the rock star Vatican assassin himself is planning to relaunch his career by going all Hispanic on us, making telenovelas and eating burritos and doing whatever else falls under the ill-defined umbrella of ‘vaguely Spanish things’. It’d be like when Will Ferrell made Casa de mi Padre, but without the undercurrent of sneering neocolonialism. Hurrah!

Would you like to see Charlie Sheen – sorry, Carlos Estevez – making a really weird Almodóvar film? We would. We’d like that more than anything in the world.