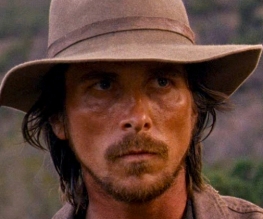 Considering how much less of it they have than everyone else, the US really knows how to drag the most out of their completely crackers history; Christian Bale (The Dark Knight Rises) is currently in talks deeper than Batman’s voice to play an assassin in A Creed of Violence, a tale involving a great many guns, quite a lot of oil and several members of law enforcement, coated in a sheen of Mexican revolution.

Based on Boston Teran’s fifth book (which we’ve obviously all heard of, shh), Bale would be set to play Rawbone, a hitman in 1910, whose estranged son works, conveniently, for the Bureau of Investigation (the FBI v.1.0). Like Thelma and Louise but with way more sweat, it’s hard to buy into the gushing words of scriptwriter Todd Field (Little Children), who has wittered on about raconteurs, and the belle epoque, and a load of other thesaurus-spooge most people don’t care about unless there’s a synonym for “pictures of Christian Bale decisively blowing shit up”. However, with films based around similar themes making good (e.g. There Will Be Blood), he might not even be wrong.

We at BFF however, are complete nerds who like the idea of one less film about weddings and pink shit in exchange for one more about US oil imperialism, especially when Michael De Luca (The Social Network, and officially signed on for Fifty Shades of Grey) is producing and it’ll be SO COOL.

Previous: Cockneys vs Zombies gets bloodsoaked trailer
Next: Charlie Sheen and Lindsay Lohan for Scary Movie 5?!