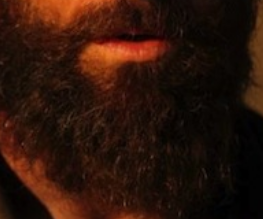 It’s funny, isn’t it, if it’s The Avengers we get snotty, but the second you toss some bellowing French revolutionaries into the mix we go all fan-boy. That’s quality journalism for you.

Anyway, it’s Jean Valjean! He stole a loaf of bread! Jackman is, of course, playing the protagonist in Tom Hooper’s Les Miserables, opposite such bearded greats as Russell Crowe, Sacha Baron Cohen and… erm… Eddie Redmayne. Will we be as excited to see pictures of their bits of hair? Probably. The film won’t be out until Jan of next year, so stay tuned, follicle fans.

Previous: Bonsái
Next: Have YOU Heard Of The Wicker Tree?