Conan sequel could prove a challenge for Arnold Schwarzenegger 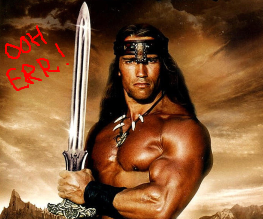 Conan the aging Barbarian is set to return to our screens, reuniting Arnold Schwarzenegger with his dusty loincloth. After a brief foray into politics, Schwarzenegger is making a slow but steady homecoming to the action roles that made his name – appearing in the moobs monolith The Expendables, as well as next year’s The Last Stand, and speaking about a potential sequel to the Terminator franchise. His return to the role of Conan confirms once and for all that Schwarzenegger will be back, if his back can handle it.

Screenwriter-producer Chris Morgan, best known for his work on the Fast and the Furious franchise, has been in talks with the original Conan this week, discussing the various challenges integral to his return. The image of the 65-year-old ex-governor of California greased-up and fur-loined may not be the most appealing Hollywood has to offer, but Morgan is keen to stress that this isn’t a return to the Conan of old: “I want the warrior whose joints have started to fuse together, who has to crack the cartilage so he can pick up a sword again” – a crack that, in Schwarzenegger’s case, will surely resonate through the world.

The forthcoming film showcases a common contemporary trend in cinema to explore the physical failings of an aging hero: “I want the guy who’s not necessarily lost a step, but there’s some rust he has to shake off”, echoing the flawed Batman of Christopher Nolan‘s Dark Knight Rises. Morgan outlines the challenge facing Conan and Schwarzenegger as: “forcing yourself to be heroic beyond what people expect of you”, which could well be a line directly from the wise old mouths of Morgan Freeman or Michael Caine.

Due to a prior commitment in 2013 to birth another addition to the Fast and the Furious litter (The Fast and the Furious 1,000,000: Cars Driving), Morgan may not be able to pen the Conan sequel himself. However, he has reassured fans that he will be there every step of the way, either as a writer or a producer. After the 2011 remake of Conan flopped at the Box Office, we can only pray that Arnie returns some dignity to the mythical hero. Dear God, help us.

Which oiled and buffed hero would you like to see Arnie try out next? Personally we’re rooting for an octogenarian He-man.