De Niro and Cooper on honeymoon? 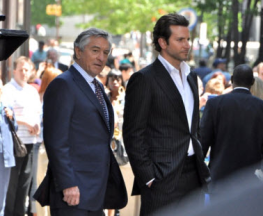 It seems that a new love affair has blossomed between actors Bradley Cooper and Robert De Niro. Having recently worked together on the upcoming picture Dark Fields, the two have gone in search of a new creative endeavour on which to collaborate.

With director Jonathan Demme onboard, Cooper and De Niro have their eyes set on the lead roles of a troublesome dark comedy, Honeymoon With Harry. The film, which is based on an unpublished novel by Bart Baker (who?), tells the tale of a former womanizer and party animal (Cooper) who changes his ways when he meets the right girl and falls in love. De Niro’s potential ‘father-in-law’ character disapproves of the relationship and sets out to destroy it. Perhaps the actor plans to dust off his old notes from the 2000 hit, Meet The Parents!

The comedy takes a disturbing turn when the woman dies tragically before the wedding. Set to drink himself into oblivion, the groom decides to go on the honeymoon anyway but everything changes when he meets his late fiancée’s father scattering his daughter’s ashes on the beach.

Yes, we know, it all sounds very odd. And taking a knife to a care bear is never without its troubles. The film had a false start back in 2004, when another creative team had problems with the story’s evasive genre. Production was eventually halted due to budget issues.

It is yet unsure whether Cooper and De Niro’s efforts will have the same doomed fate. Stay tuned…

Previous: Inception sends First Class back to the blackboard
Next: The Karate Kid