Die Hard 5 gets a title and a synopsis 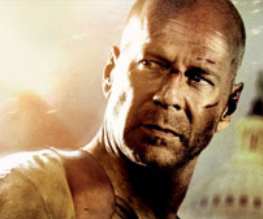 If there’s one thing these economically ruined, creatively barren cinematic times need, it’s thoughtful, original films. Or Die Hard 5. The director of Max Payne (MAX PAYNE) is on-board to helm the fifth outing of John McClane, and we reckon it’s safe to say Bruce Willis is going to spend most of it counting his money and looking very tired.

So, this time around the action is apparently going to revolve around McClane’s estranged son Jack (so many estranged children John, what a Lad you are); an almost certainly ripped young chap caught up in a prison breakout of a Russian. The Russian is probably evil. Bloody Russians. It’s up to John, his vest and his wits to come to the rescue of his imaginatively named spawn, and save the mother-loving world at the same time. Taylor Lautner for mini-McClane? WHY NOT EH?

It’s also got a title. It’s A Good Day To Die Hard. Come on guys, you can do better than that! We’ve popped some suggestions below, in case there’s still some gun-toting wiggle room.

Previous: Orange(Wednesday)s And Lemons #40
Next: Fox hires Stiller for Rentaghost