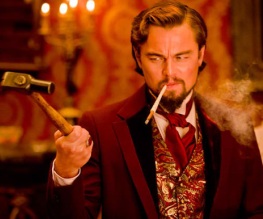 As time slowly creeps toward the release of Django Unchained, Quentin Tarantino‘s latest tale of bloody vengeance, we are blessed with another trailer detailing Jamie Foxx’s epic quest. As one of Ennio Morricone’s classic themes from The Good, The Bad & the Ugly rises on the soundtrack and becomes embellished by a hip-hop beat, it’s clear we’re in for some more revisionist history. If seeing Hitler’s face undone by round after round of machine gun fire in Inglourious Basterds was one fantasy brought to life, surely the eventual fate of Leonardo’s nasty slave-owner will be another.

Django Unchained is a tried-and-true tale of vengeance, but this being Quentin Tarantino, expect plenty of meat on the bare bones story: Recruiting Django, Christoph Waltz’s colourful bounty hunter Dr. King (Wheyy!) Schultz embarks with his ward on a mission across the South dispatching its most wanted criminals. Their travels lead to notorious plantation owner Calvin Candie, proprieter of ‘Candyland’ and current captor of Django’s wife Broomhilda.

Detailing the basics of the plot is enough to get most people counting down the days. So the trailer’s tidbits of dialogue, the galaxy of stars on display and the inevitable (and always welcome) presence of Samuel L Jackson should whip up anyone who isn’t already in a state of brat-like anticipation of its Christmas release. This new trailer for Django Unchained further confirms its bold bloodiness and proves once again that when it comes to pure wish-fulfillment, no-one is happier to oblige than Quentin Tarantino.